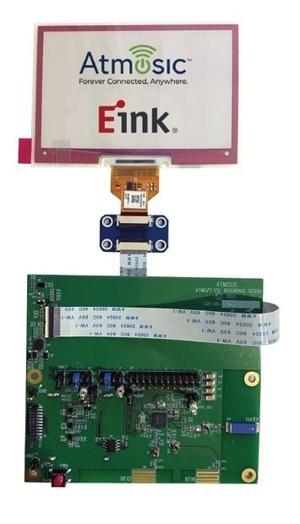 E Ink Holdings, the company that popularized the concept of electronic ink tech announced a reference design for eBadge application in collaboration with Atmosic. To get you started with the latter, Atmosic is counted among the pioneers in the extreme-low-power Bluetooth Low Energy semiconductor tech.

The partnership envisages Atmosic offering eBadge reference design that would be extremely frugal with power consumptions. No wonder, E Ink makes for a perfect fit for such applications, with the company’s 2.9-inch or 3.7-inch black and white display being among those under consideration. The 4.1-inch Gallery Palette color displays too are being seen as likely contenders for eBadge application.

According to information currently available, it is the M series Atmosic extreme low-power Bluetooth LE platform that would make the cut for eBadge. This will allow for really long battery life, extending even several years. The same can be stretched even further with the use of on-chip energy harvesting tech.

According to initial estimates, a single CR2032 coin cell battery can last more than three years under normal circumstances. That includes up to three image changes a day, something that should be enough for its intended operation. That includes using such EBadge for displaying location info, text, or alert messages, and so on. Such badges can be placed in both landscape and portrait modes.

The new eBadge application is expected to feed the market segment where demand for such smart badge devices is projected to grow exponentially in the coming years. For instance, according to research by Markets and Markets, the smart badge segment is projected to have a CAGR of 29.1 percent from 2020 to 2025. That has much to do with the convenience and transaction security that those stand for.

There has already been a surge in usage of E Ink based digital signage across parts of the world where those have been used as road signs for user convenience. With the latest endeavor, the use of E Ink based signs is only expected to scale newer heights.

The complete press release can be found here: