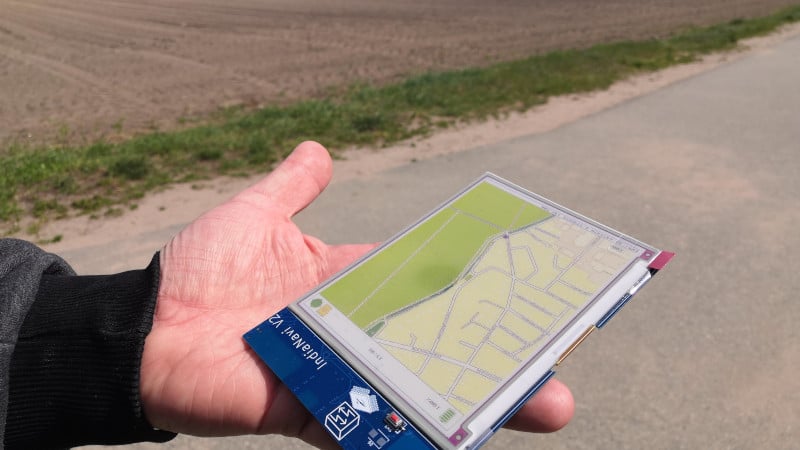 One of the several reasons smartphones are great to have in our pockets is that they provide us with navigation details that are customized to our needs. That’s a great thing to have when making our way through unknown places, and the results shown are pretty accurate as well, in most of the cases at least. There sure are instances of people getting stuck in the middle of nowhere while following Google or Apple maps though such instances are fast becoming a rarity.

It is here that gadgets such as the IndiaNavi gains relevance. The device also is as rudimentary as it can get, with the highlight here being a 5.65 inch, 7-color e-paper display that works in conjugation with an ESP32 microcontroller, a GPS Receiver, and the OpenStreetMap Data, all of which lets you have accurate mapping information anytime you want.

One of the biggest advantages here is that the map is good to read in direct sunlight as it is off it, as is usually the case with e-paper displays. Turn on the device and you will get to see the map with your current location marked out. Also, with most maps already pre-loaded on the device, it shouldn’t be much of an issue even in places where there is no signal. All of the map files are held in a microSD card that is part of the current setup.

Further, it being an e-paper display, energy consumption is as low as it can get, with the device lasting several days on a single charge of the LiPo battery. All of the electronic components are held together within a 3D-printed enclosure that again mimics a book. The overall theme is maximum functionality with minimalistic design, something that applies to the software as well.

All of this makes the new IndiaNavi a very well thought out device that can be a must-have for explorers and adventurers. However, it still is a work-in-progress thing though anyone interested can get one assembled oneself as well.