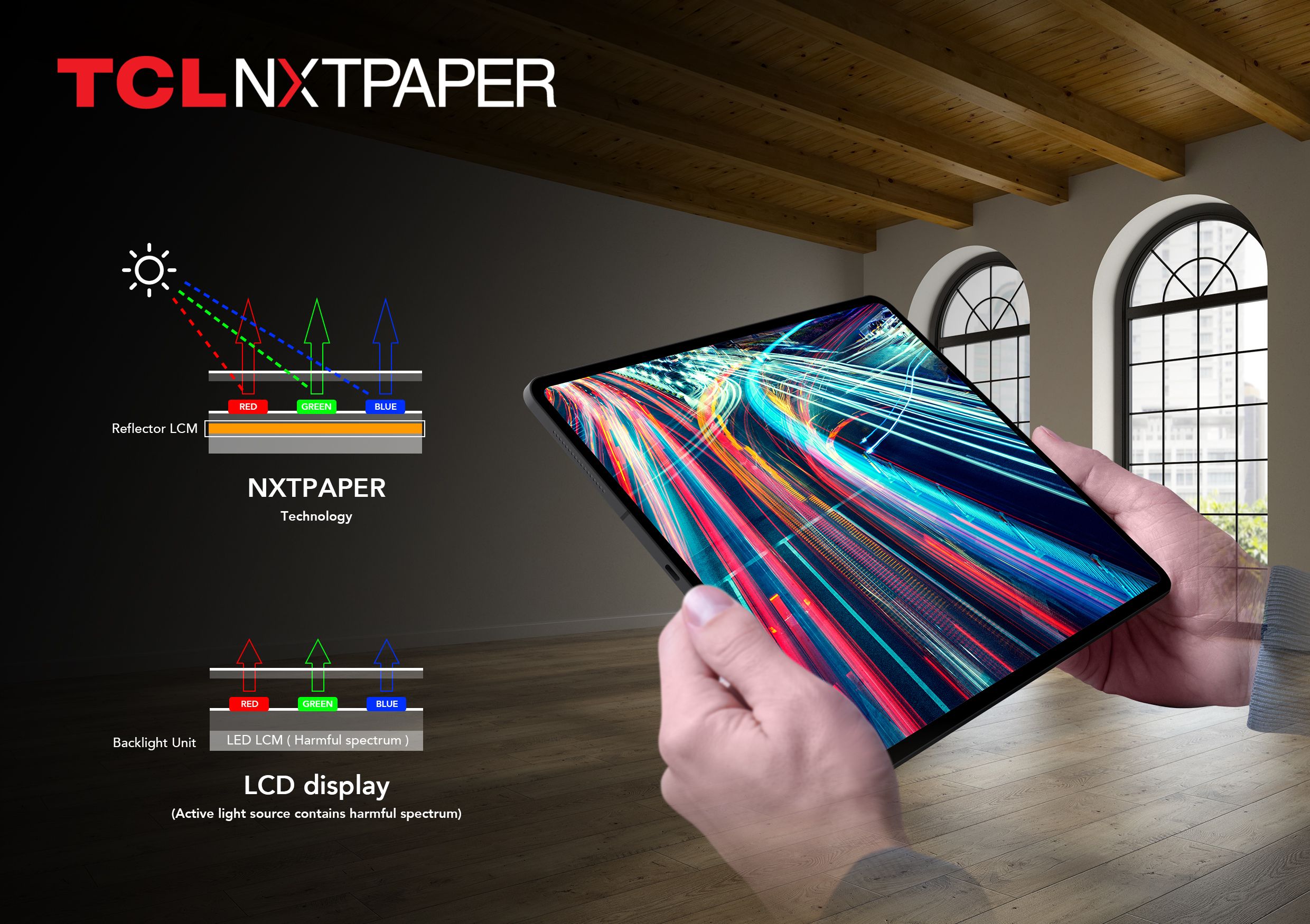 TCL is the company responsible for making budget 4K televisions and all sorts of other devices, such as smartphones and tablets. They have just unveiled a new breed of screen technology called TCL NXTPAPER and they want to compete against E INK for readers eyes. The new TCL NXTPAPER technology is a low-power, reflective display that works without a backlight, but which displays color graphics at refresh rates high enough for video or other animations.

The company’s proprietary NXTPAPER display technology is the artistic combination of screen and paper and the culmination of two years of product research and design as well as 11 patents for eye protection. This display technology provides Full-HD definition that offers a paper-like visual experience in full color with no flicker and no harmful blue light. TCL achieves this by combining a highly reflective screen that uses TCL display technology to reuse natural light and has received eye protection certifications from the German Rhine laboratory as well SGS laboratory and German VDE.

When compared to traditional e-ink, TCL NXTPAPER has 25% higher contrast for better viewing and when compared to a typical LCD panel, TCL NXTPAPER is up to 36% thinner creating a device that can be much slimmer and lighter. NXTPAPER display technology is also more than 65% more power efficient than a typical LCD, allowing for much better battery efficiency and overall longer device battery life. Designed specifically for larger format devices, such as tablets, TCL NXTPAPER technology is ideal for learning and reading, but also allows for smooth video playback which creates a better work and learning experience.

Typically, E Ink devices refresh at very slow rates, making it difficult to enjoy videos or animations on them. Some companies like Hisense for their smartphones and Onyx Boox for their e-notes, have sought to solve this issue with various speed mode enhancements, which are basically different types of A2 mode. If TCL’s NXTPAPER does support smooth video playback at a respectable frame rate, it would be noteworthy.

The NXTPAPER basically does not have bluelight, does not have a backlight, has anti-glare technology and removes the flickering that makes reading on a traditional LCD tablet very hard. I think this is similar tech that was employed on the Hisense Q5 tablet, but instead of it being monochrome, the TCL variant can display color. It took two years to develop, which is a huge achievement. Clearink also has similar tech, but it has been in development hell for at least 7 years, with no sign of a product in the near future.

Here is a video from the TCL event that happened today. The timeline has jumped to where they talk about the new screen tech.