You are here: Home / e-Reader News / A New eInk Based eBook Reader for Your Smartphone 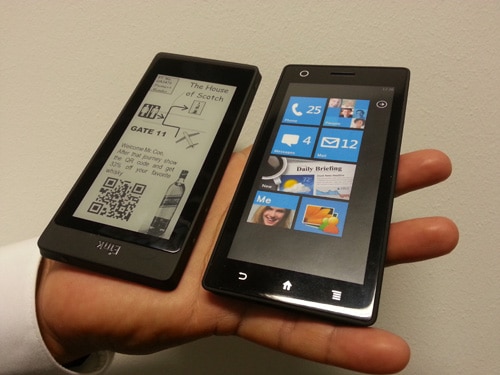 The once extremely popular e-ink based displays have been witnessing a steady dip in popularity now that Amazon, one of its biggest backers with the Kindle line of e-readers, is showing increasing reliance on LCD displays. The electronic paper display has hit upon a novel idea to keep itself relevant in the fast changing tech scene. If present gen e-book readers prefer a LCD screen for its ability to render full color displays among several other positive attributes, e-ink can find application in the most unlikely device: smartphones.

Smartphones can have a second e-ink based display which will serve as a smallish e-book reader. Not too small, though, as the general trend with smartphone displays is that they all seem to be fast approaching the 5 inch dimension that was once considered a bit big for smartphones. All the usual bonuses associated with e-ink remain intact, the first of which is its extremely frugal battery demands. Extended periods of reading off your smartphone won’t boil down to rushing to the charging dock every few hours.

Another positive aspect to having a second e-ink enabled display on your smartphone is that it can be used to display an image which will remain intact even when the phone’s battery is down to its last ounce of juice.

The prototypes were shown off to phone manufacturers at IFA and the response has been quite overwhelming. One phone maker that preferred not to be named is already sold on it, with more expected to join the fray. This might even include Apple and though such a feature would no doubt add an extra layer of appeal to the upcoming iPhone, it will be interesting to see how Apple responds to it, given the company’s penchant for exclusivity.