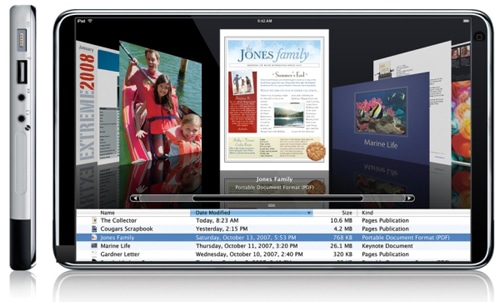 After much speculation, Apple’s long rumored entry into tablet computing domain has finally arrived. Quite a stir was built around the new creation and ramped up all over the web. Putting rumors to rest, Steve Jobs pulled the curtain off the new kid on the block. Though the iPhone is considered Apple’s next generation Message Pad, the iPad does resemble a large iPhone, complete with home button and a glass touch screen.

It has not hit the shelves yet, but prospective buyers are either writing it off or swearing that this is what they had been waiting for.

Touch Screen-Must or Bust? Are we geared to use these touch screen devices? The virtual keyboard can prove to be as much a liability as an asset. At 9+inches, it is too wide for thumb typing. It may not be perfect either for actual typing, with the world being witness to the typos Jobs made during its resplendent launch. You have the option of plugging in a physical keyboard but then, why would you want to lug it around?

E-Book Reader Function- With Amazon’s Kindle and Barnes & Noble’s Nook having made headway into the e-book reader’s market, will the iPad spell any kind of competition? You can download and read books and publications on your iPad, and that sure is one of its attractions. Yet, a person looking for an e-Book reader would refuse to shell out extra dollars for this sleek machine. And he would be justified; his laptop or his net-book has it all and some more.

Video, music and all the rest….The iPad is Apple’s answer to an all-in-one package for connectivity, computing, gaming, music, movies and any other task you may think of. This can garner in a lot many fans for the iPad, being way ahead in offering an enormous possibility of apps. You can find a ton of free apps at our E-Reader Forum

Applications-Is this why iPad will work while others have failed? The touch screen tablet PC is not a new phenomenon. Companies have tried and unfortunately failed. This screen is what augurs an increase in price, yet its use cannot be labeled as tried and tested. There are plenty of ifs and buts, which remain to be answered.

Tap the AppStore icon to browse a section featuring apps designed only for the iPad. The iTunes Store itself has access to 3,00,000+ Apps. You couldn’t possibly be looking for more. Chances are, that the iPad will work because of its compendium of apps. We need to wait and watch.

Like all Apple products, the iPad looks simple and well built, with plenty of punch packed inside. It is Apple’s attempt to blend all recent advancements in modern computing in one product that you would yearn to own. Granted, it will not exactly fit your pocket, but it is small enough to easily travel anywhere with you.