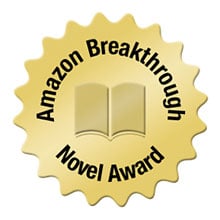 The Amazon Breakthrough Novel Awards offer opportunities for authors of various fiction genres to compete for a publishing contract and advance in two categories, general fiction and young adult fiction. GoodeReader spoke to both the young adult fiction winner, Regina Sirois, and the general fiction winner, Alan Averill, and both authors had a striking similarity: complete humility about their writing talent and audience appreciation.

“This is my first good book. No one will ever see my other book, except for my wife. I had to write a bad book to figure out how to write a book, and it was based on a play I wrote in college. I didn’t know how to write a book, so I wrote the novelization of my own play. I also wrote it on my lunch break at work, so I only had an hour to write every day,” explained Averill, in a mock self-deprecation of his first attempt at novels.

Fortunately, his second book—or as he likes to call it, his “good” book—was far better received. Of the 5,000 entry limit in each category, his title, The Beautiful Land, advanced through each stage of the ABNA competition to finally be voted by the reader public as the top pick.

“I wrote the first chapter in the car in the fall of 2008 while I waited for my wife to run a half marathon, then wrote most of the rest of it during NaNo (National Novel Writing Month) of 2008. I finished it during the following January. I shoved it in a box for a month so I wouldn’t think about it, then pulled it out and began the work of editing before querying it to agents.”

But as with so many successful indie authors, the work of even finding an agent proved difficult in a publishing market that is so closely tied to the sales trends. With a somewhat mixed genre of science fiction with elements of literary fiction and romance, it was hard for Averill to pin down his pitch. Fortunately, he revised that pitch extensively in order to enter The Beautiful Land in this year’s ABNA, as the first round of the competition whittles down the 10,000 full-novel entries based on their ability to hook the panel of judges.

Now, the work of turning his previously self-published book into a traditionally mass-marketed book begins. As both winners in the ABNAs win publishing contracts from Penguin, the authors will begin working with editors to polish—or sometimes, even entirely rewrite—their works.

“This whole process has just been crazy and I’m obviously very grateful to CreateSpace and Penguin. I have several more ideas for books, but right now I’m not even thinking about the next book because this is a giant project.”