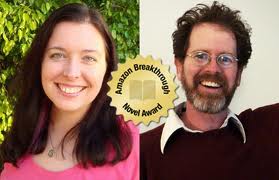 For many writers trying to develop an online presence, writing contests afford the possibility of earning their works some necessary exposure. Everything from microscopically short flash fiction and haiku, to epic tome-length entries can bring about vital publicity and put writers’ works in front of publishing industry experts.

Each year in January, Amazon.com hosts its Amazon Breakthrough Novel Awards, which allows writers to submit full-length novels for consideration to win an advance and a publishing deal with Penguin Group USA. The winning entries will be published by Dutton and are slated to be available in June 2012. The contest has gained such popularity that it now has two separate entry categories, fiction and young adult fiction.

This year’s general fiction winner was Greg Hill, whose work East of Denver rose to the top of the more than 5,000 entries alongside the young adult fiction winner, Jill Baguchinsky with Spookygirl.

“I had entered ABNA once before a couple of years ago,” says Hill, “and obviously didn’t win that year. So when I stumbled on the announcement that ABNA was open for entries this year, I entered my most recent manuscript. I didn’t really even think about it again until I found out I made the cut for the top 250 entries.”

The ABNA competition works on a series of rounds, the first round being to narrow the field of 5,000 entries to the top 1,000, based on the authors’ pitch of the manuscript. That field is then narrowed to the top 250 based on reviews from staff members of Publisher’s Weekly and Amazon.com’s fellow sponsor, CreateSpace. From there the entries are finalized to the top fifty, then the top six. But Hill never counted on making it that far.

“With every round I kept thinking, ‘This is the cut where I’ll fall out,’ but I didn’t,” adds Hill, who works for Denver University in—oddly enough—library acquisitions for the campus. “The thing that really struck me when I met the other finalists before the winner was announced was that they were all humble to a fault, as if they couldn’t believe this was happening either.”

“I don’t do well with authority, but I went into this process thinking, ‘I’ll listen to these people. They know what makes a book great,’ and it’s true. I have an editor now as part of the process of publishing East of Denver, and it’s actually exciting to receive her notes and revision suggestions. At first it was kind of strange to have someone tell me what to change about my book, but all along I’ve been able to see that her comments are right.”

Hill credits his experience as a musician with helping him see that not every review will be positive. For many writers, the reviewing and revision process can be painful. “My music helped me see that the creation of the book is the goal, not the finishing or publishing. My best days happen when I find myself with four hours to just sit and write, no matter what the end result is,” explains Hill.

The ABNA awards are co-sponsored by Amazon, Penguin Group, and CreateSpace.