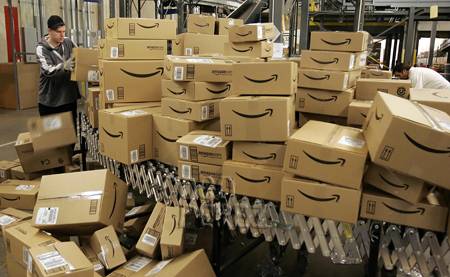 The struggles Amazon.com has faced on a state-by-state basis have been raging since last year and the online retailer seems determined to meet all of the battles head-on, even going so far as to spend as much as $5 million on a campaign to repeal the July legislation in California that requires the retailer to collect sales taxes on internet transactions. In states where Amazon has lost the sales tax argument at the hands of lawmakers who are eagerly trying to make up for revenue lost in the recent economic downturn, the online giant has attempted to make amends with legislatures by investing in jobs and distribution centers in return for coming to a consensus on the issue.

Now, Amazon has attempted to sway California’s voters and politicians on an upcoming sales tax repeal with promises of a $500 million investment in the state and the creation of nearly 7,000 new jobs in two new distribution centers. However, the groups that claim to represent the interests of brick-and-mortar retailers remain unimpressed and unswayed by Amazon’s promises to make this good-faith investment. While some claim that this introduction of new facilities is just the retailer’s attempt to buy the hearts of the voters, this investment plan comes after an announcement that Amazon has pushed for the building of several additional distribution centers in China and new properties in India, Ireland, an possibly Italy.

While a handful of lawmakers in California have urged all parties involved to work on a solution that will mutually benefit the retailers, the consumers, and Amazon, it is hard to feel anything other than disappointment in the constant targeting of the obviously singled-out bookseller. Amazon has clearly announced in the past—and in these ongoing discussions—that it fully intends to comply with any future federal legislation that settles the internet sales tax argument nationwide (which could come as early as January of next year) but that as the law stands right now it is in full compliance. No single company should be forced to meet the demands of fifty individual states when the law has stated otherwise.

Given that this is now a global e-commerce world we live in, the breadth of Amazon’s reach into foreign markets could quite possibly leave the U.S. without any order fulfillment sites at all. Purely on speculation here, it would make sense for Amazon to avoid paying fifty different versions of a state sales tax on all online orders and instead rely on a more steadfastly defined import tax to ship every U.S. order from overseas. It would be detrimental to the consumers if it came to that, but if the U.S. lawmakers don’t quit using Amazon as a means of paying their bills, it will be the country’s consumers who suffer.