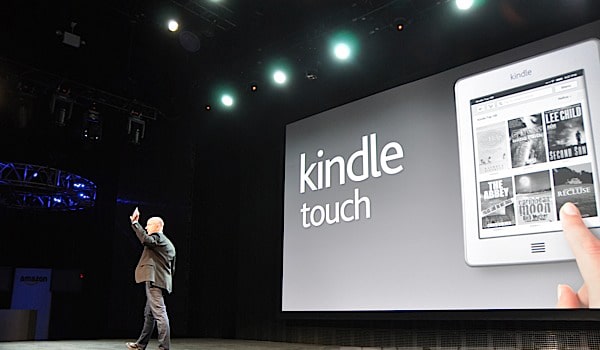 Amazon held a massive press conference in New York City today to unveil some new devices! CEO Jeff Bezos hit the stage and started the show with talking about how the company reinvented the book.  “Four years ago we set out to improve upon the book. When you decide to reinvent something that’s been around for five centuries, you’re rightly going to receive some skepticism.”

The CEO continued with hyping the main facets of the entire Amazon experience such as Kindle Singles, their new HTML5 App, library lending, Whispersync and more!

Amazon then debuted three new devices the new Kindle Touch! They all had a 7 inch screen with IR touch similar to the Nook Simple Touch and the Kobo Touch. All of the units seem to have a muted silver and look simple, clean, and elegant.

The new e-readers have a new feature called X-Ray which shows a myriad of options within the book. It gives you Wikipedia Entries and social media options.

The Kindle Touch Models also takes advantage of the free storage with the Amazon Cloud to store your audiobooks, music, books, and more!