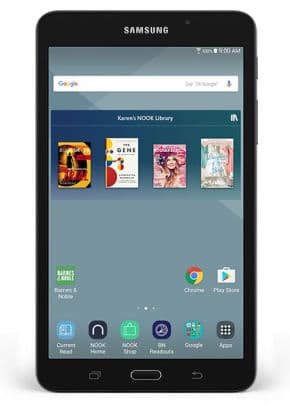 Barnes and Noble has released their first tablet of 2016 and it is another Samsung branded product. The new Samsung Galaxy Tab A NOOK is available today in every single one of the companies bookstores and online for $139.99, but if you trade in your old device you can get it for a paltry $99.99.

The new tablet features a 7 inch display with a resolution of 1280 x 800 and 216 PPI. This is an entry level tablet, certainly not meant to compete with flagship devices on the market, such as the iPad or Surface.

You will be able to access the Samsung App Store and Google Play on this device and it is running Android 5.1.1, which is fairly dated by late 2016 standards. This tablet also has a slew of customized Nook Android Apps, such as an e-reading app, library management, magazine reader and more.

Do you intend on purchasing this tablet? The price is right and if you have any problems with it, you can simply visit your nearest Barnes and Noble bookstore to get direct support.