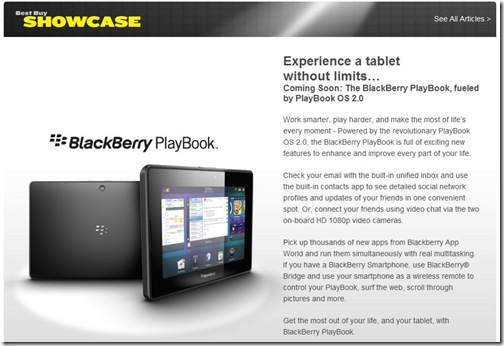 The Blackberry Playbook OS2 update is probably the most eagerly anticipated firmware update in the last few years. It really makes the RIM tablet offering relevant because it imbues you with the ability for Android Apps, a real email client, calender, and cool hardware abilities. Today Best Buy in Canada launched their promotional flyer for next week and gave us some new information! It seems with the update will an official Amazon Kindle and Twitter application!

When the Playbook first launched Amazon was expected to launch their Kindle app for the platform to give people the ability to buy and read books. This really never happened and Blackberry Playbook users have been more or less out of luck in dealing with anyone other then Kobo. There is actually no dedicated Twitter program and it is unavailable for the tablet in the App World. It does have an icon when you first unbox your unit, but is merely a shortcut to your internet browser.

It seems the Playbook is getting more traction and mainstream acceptance with new applications being launched. RIM is giving away free tablets to Android developers that port over their existing apps to the new BAR format. The process is actually fairly easy and I expect many great games, e-reading, and comic book apps to be shortly ported over. How glorious would it be for Aldiko, FBReader, and Droid Comic viewer to work on the Playbook?