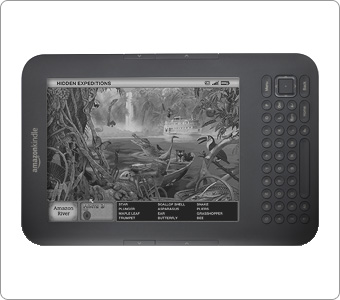 Big Fish Games Studios, creators of the game series Mystery Case Files, Fairway Solitaire, and Megaplex Madness, brought its popular seek-and-find game Hidden Expedition: Amazon to Kindle today for the first time, taking advantage of the e-ink resolution graphics capabilities of the device screen. While Big Fish’s games have been available for a wide variety of devices in the past including most mobile phones and tablets, Hidden Expedition: Amazon’s stunning visuals are now available on the well-known e-reader. Kindle users who’ve so far only utilized the e-reading capacity of their devices may find the hidden object game a pleasant distraction, and the game allows users of a wide variety of ages and ability levels to successfully play.

“The pairing of our popular Hidden Expedition franchise with Kindle, one of the world’s most popular wireless reading devices, represents an exciting opportunity that will undoubtedly captivate new – and existing – Hidden Expedition fans,” said Patrick Wylie, vice president of Big Fish Games Studios. “In keeping with our tradition of optimizing our games for new platforms, we took advantage of Kindle’s e-ink screen to create a beautiful, engrossing hidden object adventure that can be enjoyed by players of all ages.”

Hidden Expedition: Amazon invites players to search for a lost professor throughout nineteen different levels, unlocking clues by finding objects hidden throughout the complex graphics then using the device’s five-way controller to click on the items. Players can attempt each level as many times as necessary using the game’s built-in chapter selection. Up to three players can be invited to join the user during the interactive game.

At $4.99 for the download from the Kindle store, the game is about mid-range for a typical price point for Kindle digital content. Big Fish has been at the forefront of casual game development, offering its highly ambitious new game of the day feature on its site. Big Fish is one of the larger game developers and publishers that produces high-intensity interactive games for users across a large variety of language platforms, reaching consumers in ten different languages.