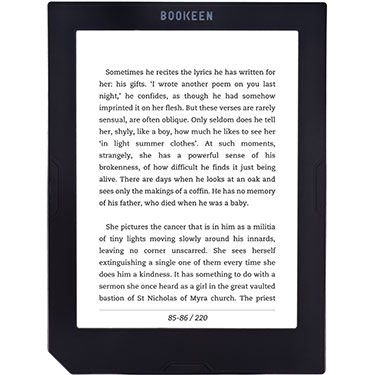 Bookeen is the largest e-reader company in France and they have just announced the Cybook Muse Light e-Reader. It will be hitting the market on October 20th for less than a 100€.

The Muse Light features a six inch e-ink carta display with a resolution of 800 x 600 and 167 PPI. It has a front-lit display that will allow you to read in the dark. Underneath the hood is a Cortex A8 1GHz processor, 4 GB of internal memory and an SD card to enhance the storage a bit further.

There is a new PDF mode with a simplified layout on this reader, something that Bookeen will be debuting for the first time.  This device also has  mechanical buttons so you can either turn pages directly on the screen or use the right and left buttons of the reader, perfectly located to facilitate the one-hand reading! This is a Linux based device, so you will not be available to install your own apps.

I think this is a solid entry level e-reader for people who do not want to be locked into one specific ecosystem and this is the first new e-reader Bookeen has released since 2014.