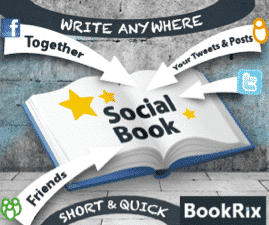 BookRix initially started in 2008 and has become one of the largest international book communities of its time. BookRix connects ebook distribution with social media on a single platform that houses over 500,000 members. Writers can distribute their work on BookRix and also submit it to Barnes and Noble, Kobo, iBooks, Thalia, and Amazon. The company has announced today that starting this October it is doing away with the previous pay to self-publish model and offering a completely free service for all authors.

“Authors and their ebooks need free and uncomplicated access to all the important online shops, to co-create a free ebook market,” says Gunnar Siewert, CEO and cofounder. “We want the authors’ books and not their money.” In addition, BookRix will be reimbursing all authors who previously paid for ebook publication with the company.