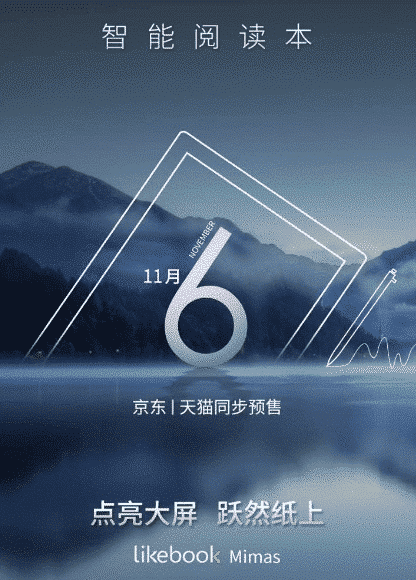 Boyue is going to be releasing a larger version of the Likebook Mars on November 6th in China and it should be available in North America soon thereafter. The Boyue Likebook Mimas has been teased on the companies official Twitter account and also on a Chinese forum. There is no word on how much it will cost.

Underneath the hood is a octa-core 1.5ghz processor, 2GB of RAM and 16GB of internal storage. It will have an SD card capable of 128GB of expandable storage. It will be powered by a 4700 mAh battery and have USB-C for charging and transferring of data. The Mimas also has audio functionality via the two speakers on the back, a 3.5mm headphone jack and Bluetooth support for wireless headphones. You will be able to use Skype or Whatsapp or other chat options that rely on a microphone, since this model has one. But it does not have a camera.

The last generation Boyue was running Android 6.0 and a custom OS layer. This device is geared towards being a dedicated ebook reader, but can install alternative apps, but it does not have an app store pre-loaded on the device.

I was a huge fan of the Boyue Likebook Mars. It was the most powerful e-reader ever made and Android works fine on it because of the massive hardware specs. The Mimas should provide the same type of experience with a much larger screen.