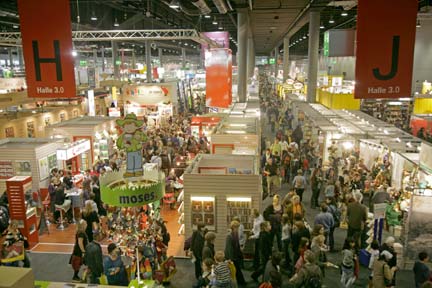 At the second Publisher’s Lunch of the Frankfurt Book Fair, the topic of discussion turned to digital content for children. As GoodEReader.com mentioned yesterday, the advent of the Kindle Fire tablet and the release of over 1,000 titles for children on the color-enabled device means a race between the tablet companies to provide quality ebooks for kids.

One of the major issues for both parents and educators when it comes to children’s ebooks is the price. Where a print edition of a large-sized popular children’s title can easily run as high as $30US, the justification for keeping children’s books at an unbelievably high price point on e-reader seems built in. Some of the titles that will be available for the Kindle Fire and Nook Color this fall are actually higher than the cost of the hardbound print edition, such as in the case of the title mentioned yesterday, Brown Bear, Brown Bear, What Do You See? At nearly thirteen dollars, the ebook costs more than a retail chain store’s cardboard edition.

While publishers are the ones who set the price of digital editions of children’s books, it’s disconcerting that a fixed-page children’s ebook costs so prohibitively more than some of the app books that smaller publishers are developing for children that include such features as human-narration, highlighted read along text, touch-screen word pronunciation and foreground spelling, interactive word games, and more.

“zuuka is one of the pioneers of digital children’s publishing across both apps and ebooks and we were very honored to be in such good company as Nickelodeon, Scholastic and Egmont,” said Woody Sears, founder of zuuka. “Our in-house development team is extremely talented and being selected to such an important panel shows that zuuka’s ability to develop high quality digital children’s content is being recognized throughout the world.”

“Now it’s kind of flipflopped …you make an iOS app and an Android app of the same book and you’ve reached 90% of the ereader market,” says Graham Farrar of iStoryTime in an interview with GoodEReader yesterday. “App books are focused on how much value can we give the reader instead of how much value can we extract. App books are probably a little less expensive than they should be for what readers get in the interactivity; certainly ebooks should be cheaper than the static book since there are no printing and shipping costs.”

As juvenile content has become an important issue at Frankfurt, hopefully more interactive titles at a lesser price point will arrive in the more mainstream children’s reading catalogs in order to maximize the potential of tablet reading for children.