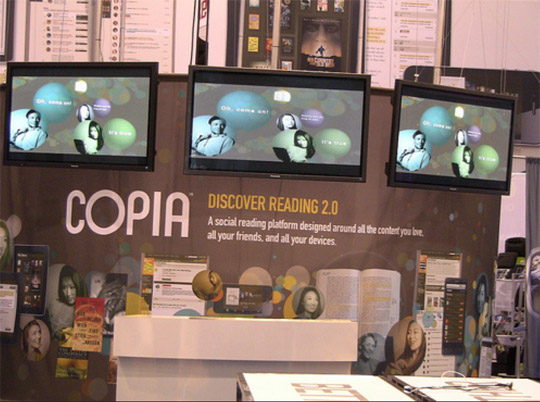 Copia had one of the most elaborate booths at CES in the main hall that advocated their new social reading platform for Android, Apple, Windows Tablets, Windows Phone 7 and others! The main premise of the service is to combine social reading along with purchasing ebooks, without being locked into a specific device such as the Kindle.

The Copia platform allows people to share their thoughts and notes on the books with social media functions reading the book. The demo we saw allow users to make comments and notes and read other people’s comments on their own electronic copy of the book. They also designed a new feature to allow users to befriend each other and check out the books their friends have read. So if you have a friend with whom you have the same literary interests, you can keep up to date on all of the books they have bought from Copia as well as their opinions on the material.

The Copia system also has social media intergration with Facebook and Twitter. While you are reading, you can get a prompt to share the book title via social media. While the social sharing is intentionally limited (not posting to Facebook every time you make an annotation, for example) the possibilities of social media sharing are intriguing for an e-Reader platform.

Copia has a large eBook library with around 200,000 existing titles with many different genres from student textbooks to bestsellers. The company is even integrating the entire project Gutenburg into their existing library. The prices on the books are very competitive; most prices we saw were from $5 – $10 and included books by Stephen King and many other popular authors.

The main selling point on Copia s the fact that it acts like a virtual book club and allows users varying tools in order to discover new authors, compare notes, and share development and character information with each other. Since bookstores seem to be dying, or at least tremendously unprofitable, many companies see their future in the online space in order to make money. Since book-clubs are a rarity these days, it’s great to see a company whose main premise is social reading.

We also have some scoops on the next generation of technology that Copia is employing. Some examples include allowing unpublished authors to load their own books into Copia, independantly downloaded books to be imported into the social reading platform, and people sharing community notes. We also got some information on universities and students being able to access their course books online.