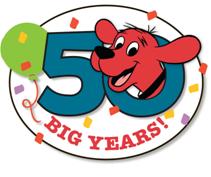 For those who stay current on the trends in digital publishing, one of the best aspects of the possibilities associated with technology of digital publishing is its ability to bring to life some of the favorite characters from the past. Sesame Street has already gone digital, along with Dr. Seuss’ time-honored classics. Now, Scholastic, the world’s largest children’s publisher, is bringing Clifford the Big Red Dog to the online and app realms, just in time for his 50th birthday.

“For 50 years, Clifford has earned a place among the most iconic and beloved characters in children’s literature and entertainment,” said Deborah Forte, President of Scholastic Media and Executive Vice President of Scholastic Inc., in a press release today. “We are delighted to invite children and families to participate in this BIG celebration – and to congratulate Norman Bridwell on this extraordinary milestone.”

Coming this fall, Scholastic will publish Norman Bridwell’s Clifford Collection, a collection of six classic stories originally published between 1963-1977, which will include an original letter from Norman Bridwell to the reader, information about the creation of Clifford—including the original and never-before-seen 1962 painting that inspired the Clifford series— and the story behind the real Emily Elizabeth, Clifford’s young human. Additionally, titles released in the coming year will be simultaneously released as ebooks in both English and Spanish.

As for apps, Clifford’s BIG Birthday App for iOS and Android will launch in September, in which Emily Elizabeth brings readers on an interactive adventure while they plan Clifford’s surprise party. Further interactive fun includes the ability for young readers to send Clifford an e-card for his birthday throughout the year, as well as the option to enter a national sweepstakes to win a Clifford celebration in their hometown in February.

There are over 126 million Clifford books in print, while the Emmy Award-winning Clifford the Big Red Dog series, which is still shown on PBS stations, is broadcast in twelve languages to thirty countries, and has a 2004 Warner Bros. feature film, is one of the longest-running children’s programs on television.