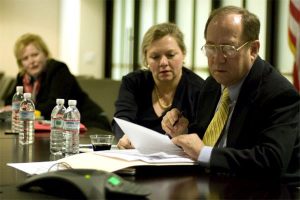 Amber Swope, founder of DITA Strategies, hosted a webinar with Data Conversion Laboratory last week to introduce attendees to the structured architecture of XML. Some of the specific teams in attendance were educational publishers looking for a format that wasn’t so proprietary, an important factor in making digital content compatible across platforms. Swope spoke to GoodeReader about where these attendees’ interests in XML lies, as well as why educational publishing already lends itself so well to this source format.

“I was surprised by the number of people who already knew about DITA and knew a significant amount about it,” said Swope. As part of the webinar, teams were given questions to answer on a variety of related topics and the final poll of the attendees was centered around whether or not the teams felt that moving to XML would be important to their business, and the response was surprising.

“Seventy-five percent of the teams said it was critical and 25% said it was important to their business. No one said it wasn’t even on the radar. In that respect, I feel that we were talking to the correct people. They know they need to change how they distribute content in order to effectively stay in business.”

“We had a lot of good questions. They ranged from more general questions like, ‘Can you recommend tools to consider,’ to more specific ones like, ‘Which industries have adopted DITA as a mechanism for their standards.’ One thing we talk about all the time is that there’s benefit to moving to XML, but it’s not for the faint of heart. It’s an expensive proposition, in terms of finances, resources, and sheer energy, particularly for teams that have their content in unstructured sources since the conversion to a highly structured format like DITA is painful because it’s not simply a conversion that entails rewriting.”

“One of the issues for attendees interested in DITA or XML is that many of them are currently using proprietary systems of standards. These systems, written for the specific company and its needs, not only need updating and revision, but also require a whole new set of training whenever personnel changes take place. Swope shared that one team attending the webinar was doing so because the one person who knew how to use the company’s current standard had left the company and there was now a void for information on the standard.”

Swope went into greater detail about how companies have paid to translate their content to a particular format, but the cost goes up exponentially when there’s a change. XML allows the author to make changes to only a few sections and streamlining the change. This is important for publishers looking to release a second edition of a book without wanting to open the entire collection of information for revision. This is important for companies in fields like science, for example, where updates can be frequent.

“For people in educational publishing, the conversion might not be as bad if they already follow the industry best practices. The more structured their content, the easier it is to move to a structured architecture.”

“I was pleased that we got some good questions and I felt that I had communicated my message effectively, that everyone felt this was important. I think that attendees were looking at XML and trying to figure out if DITA was the right move.”