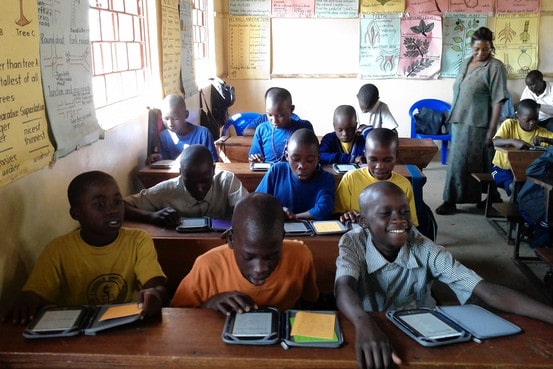 In the developing world, some groups of people don’t have the money to build a house or school, much less a library. Worldreader ran a campaign in which the company dispensed 600 Kindle e-readers to children in Ghana. The results showed a number of interesting things. First, standardized test scores and literacy rates among the students improved, as teachers found themselves able to access quality textbooks and reading materials far more easily with digital reading. However, just like their counterparts in any classroom in any given country, the students were apt to be distracted by features like music and games.

The vast majority of libraries in developing worlds do not carry ebooks, and most e-textbooks cost over $90.00. This creates any environment of prohibitive costs and is a huge barrier for lower-income students. One of the bright spots is the Boston Public Library, which makes its digital titles available in Bangalore, Budapest, Beijing, and Baghdad. Hardly the developing world, of course, but at least the globalization will help expand the number of people who can access free reading material.

e-Readers in the classrooms in developing worlds are not gaining much traction. While the hardware to make this happen exists, the software, content, and access to content is not completely developed yet. Amazon recently launched a new resource for teachers, Whispercast, giving tools and tips to administrators trying to integrate e-readers into classrooms. It allows ebooks and course materials to be sent to an entire fleet of devices at once, instead of one by one. One of the advantages of Kindle devices is the 3G variants will provide free internet access, which is something most devices do not offer.

One of the longest standing projects to appeal to Africa is the One Laptop Per Child program. It originally started in 2005 with the goal of creating very low cost laptops for educating kids. Since the project first started, it has sold more than two million laptops, costing around $185 each. One of the drawbacks about this project is the sheer amount of theft, with most schools getting completely cleaned out.

What the e-reader industry needs to do is develop an agnostic operating system that taps into all of the free public domain books and free educational resources. Right now most companies tend to sell their own content or release readers with access to NO content at all.

e-Ink Holdings is responsible for all the display screens found on Amazon, B&N, Kobo, and Sony e-readers. The company recently released a concept video that demonstrates how these devices SHOULD function in educational institutions in most international markets.