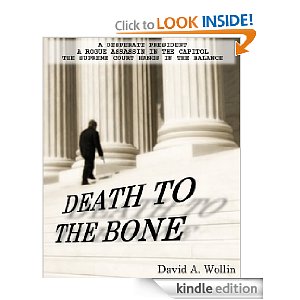 GoodEReader took a break from the Ebook of the Week feature last week while on location in New York at the Digital Book World conference. We’re please to return to offering our readers great digital content for their portable e-reading devices.

This week’s featured title is political thriller Death To The Bone, by author David Wollin. And who better to write a novel of this kind than a lawyer-turned-author.

“After the Chief Justice is gunned down in his Supreme Court chambers, aging FBI Agent Ted Bishop postpones his hard-earned retirement plans to track the assassin and becomes a target himself. But he soon discovers that the assassin has bigger prey in his sights – the President of the United States. Bishop’s only hope of preventing the President’s murder from a deadly nerve agent stolen from top secret government laboratories may lie with an unsuspecting blind woman who has decided to end her own life. Set against the backdrop of today’s divisive political climate, Death To The Bone is a thriller that will keep the pages turning until the final, startling ending.”

“I chose Smashwords because of its excellent reputation and ability to publish on numerous platforms,” says the author of his decision to make this debut novel available as an ebook on that specific distribution platform.

To download your free copy of Death To The Bone, click HERE and enter the following code at checkout: WQ79S