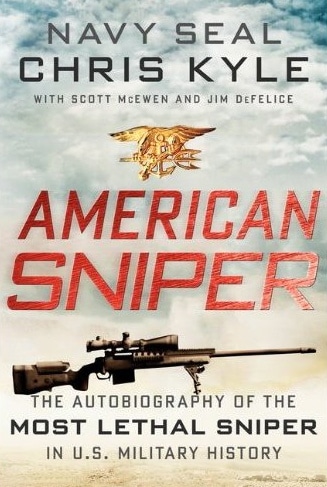 The sometimes overdone bravado and gung-ho attitude portrayed throughout this book was initially an obstacle for me, one that I almost didn’t want to overcome in order to keep reading. The stereotypical superhero tone of voice and the “only good enemy is a dead enemy” mentality were a little hard to take at times, but there’s one crucial difference between this book and others that are blatantly ultra-militaristic: this author can back it up.

Chris Kyle never set out to be the most successful sniper in American military history, the soldier with more confirmed kills than any other sniper across all branches of the military, he only intended to serve his country and challenge himself. One aspect that makes his story so compelling is his often humble gratitude towards his fellow soldiers, even while telling the bone-exposing truth about how those who command the soldiers from air conditioned offices may have done more harm to our troops than the enemy. Even more alarming were the vivid details of his combat experience coupled with his explanation of how even a sniper can be charged with murder by our own government if there were no clear witnesses and a confirmation of justification prior to his taking the shot; even as Kyle lay face down under a scorching sun, providing a modicum of protection for our Marines as they advance on foot, he knew that every shot could land him in jail.

Admittedly, some readers may have a hard time with Kyle’s brand of patriotism, because I know that reading chapter after chapter of his intense can-do spirit was exhausting. But I would also propose that the rest of us have never risked our lives to retrieve the body of a fallen American who was not going to be left behind just in case he was still breathing. What many readers may find intriguing are the clear explanations of the gear and weaponry used, as well as the descriptions of the constant training and practicing that it takes to be the best. American Sniper is truly a chronicle of what it takes to be ready at a moment’s notice to simply be the best man for the job.