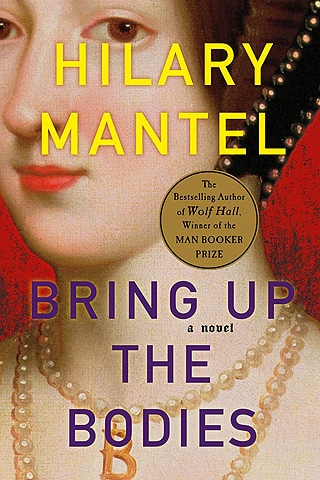 Mantel has had quite an illustrious career, with ten previous novels and a published memoir entitled Giving Up the Ghost. For those prior works she has won an impressive string of accolades, including the 2006 Hawthornden Prize, as well as both the 2009 Man Booker Prize and the National Book Critics Circle Award for Fiction, both of which went to the book that led to Bring Up the Bodies, entitled Wolf Hall.

The sequel, Bring Up the Bodies, is told primarily from the point of view of the man who was possibly closest to the king at the time of his ordeal of a marriage to Anne Boelyn, Thomas Cromwell. While we see Cromwell’s ruthless disdain for Queen Anne, it is easy to forget that he will years later end up on the same scaffold where Anne’s reign as queen ended.

To find out that Mantel has received such honors for her writing, I really expected more from Bodies. It was difficult to follow as various characters jump into the conversations and Cromwell is taken with having whole scenes play out as narrated daydreams; it was also written in the outdated language and conventions of Elizabethan literature. But moreover, there was very little new information, even for a work of fiction. With such popularity right now for books and programs about Henry VIII and Anne Boelyn, and given that this is a work of fiction, I felt like the author could have taken a few more liberties with the story to pique the readers’ interests.

Having said that, the straightforward story line and the voice throughout the book might be exactly what purist fans of Tudor literature are looking for. Many readers undoubtedly want their historical fiction with only minor nuances as to personality or locales, rather than riddled with entire events that we have no proven record for. And whereas authors like Philipa Gregory play up the details of daily life, Mantel tackles the realm of noblemen, providing entire conversations between the men behind Henry VIII and the absolute open loathing some of them at court felt for the upstart Anne.

Ultimately, the information was semi-intriguing but the writing style forced me to decipher the text rather than read it.