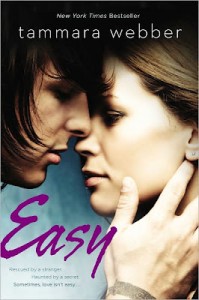 This title introduced me to a new subcategory in the romance genre: New Adult. All I can say is, it’s about time.

For far too long, we’ve had polar opposites in the addressing of sexuality in romance. There were the steamy bodice rippers at one end of the spectrum and on the other end there were the very chaste books aimed at an audience that preferred love story over lust story. Caught in the middle were the young adult readers, people who may be exploring the romance genre but were too mature for books that didn’t address sex in any way, yet were not quite prepared for the shirts coming off in every chapter.

Tammara Webber’s newly released Easy (Penguin/Berkley), formerly published in May as an ebook-only title, does take into consideration the age-appropriateness of the topic in the book, but there is so much more to the actual story. At first glance, this could be shelved as a romance title under the New Adult category, but romance and sexuality aside, this is a far more important title about the choices people make with their bodies and the things that happen to them when those choices are ripped away.

One of the major elements of the story line is how rape is addressed, specifically of young women on college campuses. In the very first chapter, the main character is rescued in the nick of time by a classmate as a drunken partygoer attempts to violently force himself on her. That same attacker will factor throughout the story in threatening ways, later to succeed in raping another student from the same dorm.

Aside from the questions of trust and lies the characters must confront, Easy is a very powerful book about the shame that victims feel and the lies that bystanders tell themselves when they don’t want to see the truth.