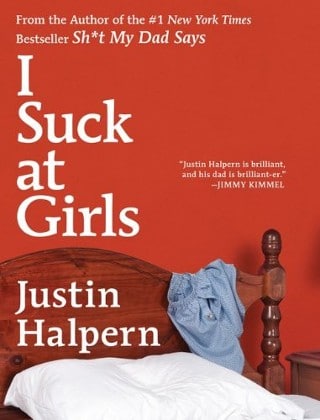 Screenwriter-turned-author Justin Halpern has made an entire career out of being emotionally roadkilled by his saintly father while allowing the readers to have front row seats to laugh at his misfortune. The accidental author of Sh*t My Dad Says, a bestselling title that grew from his Twitter account of the same name which literally chronicled the daily pearls of wisdom that fell from his father’s profane mouth, is back with his hilarious timeline of romantic failures, all of which led to one of the most heartfelt proposals in the history of people marrying each other.

While the book had its trademark uproarious scenes, it lost a star for the cringe-worthy self-exposure. Yes, the author’s quest to lose his virginity was well written. The actual losing of the virginity at age twenty was just embarrassing for everyone involved, including the hapless woman’s pets if she had any. On the other hand, tears of laughter literally rolled down my face from Halpern’s description of being told by the emergency room doctor in Spain that the problem with his stomach was he had “too much poo poo and farts in there.”

Despite the humor, foul-mouthed parentage, and apparent self-loathing, this is one of the most romantic books I have read in a long time. That is mostly due to the fact that the author opens the book on the brink of proposing to his only real long-term girlfriend despite the break-up that resulted in a two month hiatus and the lack of any coherent support whatsoever from his overly vocal father.

As the readers have already been treated to a litany of parenting advice courtesy of book one, we’ve now come to understand just exactly how Halpern came to become a husband and soul mate. I look forward to what future topics Halpern decides to take on in his brash and self-deprecating style.