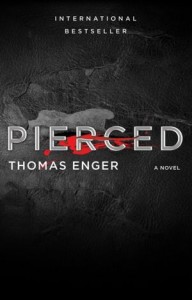 It’s difficult to jump into a sequel or series without having read all of the titles the came before, which is one of the unique challenges to writing serial novels. The author has to strike a balance between giving enough information to new readers that they can feel drawn into the story, without repeating so much back story that faithful fans feel talked down to.

Enger’s title, Pierced (Atria Books), is the sequel to his bestselling mystery Burned, and it only falls short of the information-versus-info dump in a couple of places, but the premise carries just enough uniqueness that it’s easy to overlook the occasional feeling of being momentarily lost.

Henning Juul, a Norwegian investigative crime reporter, returns in this book to investigate a crime that drags him along for the ride: a known criminal contacts Juul from prison to tell him that he has information on the fire that killed Juul’s young son and left Juul horribly burned. If the reporter will help uncover who set up Tore Pulli and sent him to prison, Pulli will hand over what he knows about the fire.

The story line is intriguing enough that it’s easy for international readers to follow along with names and places that are specific to the setting, although some of the characters’ names might be confusing for readers not familiar with all of certain aspects of Scandinavian spelling and alphabet characters. Thriller/mystery fans won’t be disappointed by where the plot takes them.

Pierced is available from Amazon, Barnes and Noble, Kobo, and other ebook retailers.