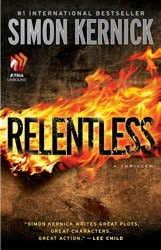 One of the greatest things about digital publishing is the connectivity that it brings to the industry. Books by authors abroad that went largely undiscovered by outside audiences are now available, thanks to the easy ability to find and enjoy new titles.

Simon Kernick’s thriller Relentless, published in 2007 in the UK, is now available in ebook form in the US through Simon & Schuster’s Atria imprint. Kernick, who also penned a number of crime titles including The Business of Dying, A Good Day to Die, and The Last Ten Seconds, brings a fresh perspective on an old favorite theme, namely of the wrongly accused innocent man on the run from both the police and the bad guys.

When family man Thomas Meron receives an unexpected phone call from an old friend, it’s not for the purposes of pleasantly reconnecting. Meron listens in horror as the friend is caught by pursuers and brutally killed, but not before shouting the information the enemy has been torturing him to get: Meron’s address. The nightmare escalates when Meron is arrested for murder, presumably of his wife, only to find out that the victim is his wife’s coworker and his wife’s fingerprints are also on the murder weapon.

Unlike many other novels in which an innocent working man is dragged into a shady plot, Meron quickly discovers he has an ally in an undercover policeman who knows Meron is not involved. Unfortunately, that may not be enough to save him from anyone who is after him.

Relentless is now available on Amazon, Barnes and Noble, Kobo, and more.