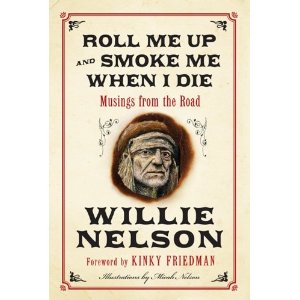 It’s one thing when a famous person happens to have a drug habit. It’s something else altogether when society—and the celebrity, for that matter—cannot figure out where the person stops being a person and becomes just another drug user.

In Willie Nelson’s third book, Roll Me Up and Smoke Me When I Die, the reader is treated to a very sad forward by co-writer Kinky Friedman in which Nelson’s life is compared to the Virgin birth before sharing how the singer/songwriter wrote new lyrics on the discards of feminine hygiene supplies and vomit bags, as well as several attempts at bragging about how much marijuana Nelson uses. It quickly goes downhill once the singer himself begins to chime in.

The book is nothing more than a stream-of-consciousness spewing of random facts and memories, without any kind of flow or reasoning. The book looked almost like a fragmented notebook that was supposed to work its way into being an actual book, only the author must have gotten too tired—or high, if the foreword is any indication—to actually get around to writing it. We’re treated to five-sentence stories about Nelson picking his nose in church until he bled, or justifications for using drugs through profanity-laced recollections. The few touching memories are scattered too far apart in the story to hold the readers’ interests.

Unfortunately, the title is misleading: the Musings from the Road part never happened. There were the occasional name drops, but otherwise, the book was severely lacking in interesting anecdotes from the world of country music and seemed to be more about the anger of a bitter man who is far from washed up, but somehow seems like he wishes to be.

The book is now available from Amazon, Barnes and Noble, Kobo, and more.