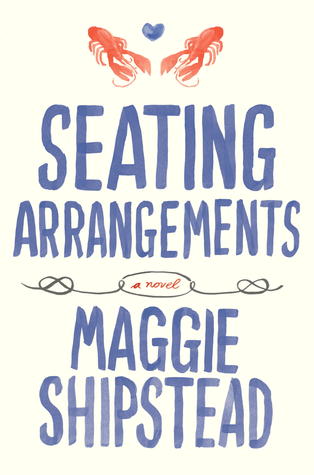 This book only scored that second star because Shipstead is very adept at forcing you to watch the car wreck of other people’s lives. The players in this story all carry their own baggage with them throughout the novel, but unfortunately for them, their past mistakes are all born out of selfishness and stupidity. These might be the wrong economic times for a book this shallow.

Winn Van Meter has every single stereotypical WASP problem: he is forced to endure hordes of relatives and wedding party members invading his summer home on an island off the coast of Maine because is daughter had the audacity to decide to marry her live-in boyfriend who impregnated her, he is Captain Ahab-like in his quest throughout the book to gain membership to the exclusive Pequod Club, he is beyond irritated that his marriage produced only daughters and no sons, and then one of those daughters (not the same daughter who is pregnant and marrying, this would be the other daughter who got pregnant and is not marrying) had to let the entire Ophidian club at Harvard–of which Winn was a member in his day some forty years ago–learn that she was pregnant by one of their current members. Of course, Winn struggled all weekend with whether or not to consummate the affair he has been considering for some time with one of his daughter’s attractive bridesmaids. Cue the violins for this poor man.

The main issue I had with this work was I could not identify with a single character for whom I could feel anything other than contempt. From the cold and calculating would-be philanderer of a main character, a man who has worked his entire life to keep his wife and children at arm’s length due to the fact that they are women, to the spoiled adult children of this stereotypical New England family of privilege whose mistakes get swept under the rug of propriety, there isn’t a single person in this story that I would hold a door open for, let alone care about.

And that is possibly intentional on the author’s part. If the reader was supposed to watch the weekend’s events unfold—events that revolve around the lavish wedding of the seven-months-pregnant daughter of the main character, a fact that she herself bemoans because she’s going to look fat in her wedding pictures—while sitting on the sidelines with mouth hung open in disbelief at the utter selfishness of all parties involved, then the author succeeded. The one character who started out as the voice of reason in the background of a few chapters, Dominique, is actually a fraud herself; while she sneers at the lifestyle of these social climbers, she’s all too happy to spend all of her vacations lapping up their beach house and the immaculately tended grounds.

For what it’s worth, Shipstead is a very good writer, but her characters and the plot lines they weave are a waste. I wish I had the ability to reclaim the time that I squandered on searching for a redeeming quality in any of the characters.