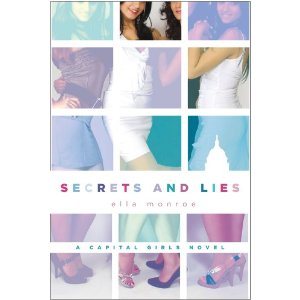 As a decidedly un-YA novel that is trying to pass itself off as hip young adult, Monroe’s recent follow-up to her Capital Girls book falls very short. The books, which follow the lives of four girls in an exclusive Washington, D.C. prep school, aims to keep up with the antics of privileged teens whose high-powered parents afford them the opportunity to do as they please.

All I can say is, if this is how the children of our government officials—the President included—behave, god help us all.

The high school students depicted in this book have no ambition further than whom they plan to sleep with by the end of the day, peppered with enough profanity to make the Navy blush. Throw in entire scenes spent indulging in smoking marijuana on campus, and you have all the makings of a book that is not appropriate for most YA audiences, as this book is a barely veiled attempt at Babysitters Club Gone Wild.

There were also some unfortunate timeline discrepancies. If this book is set far enough in the future that the US has a female President—and this installment does not indicate that she is the first female to hold that office—why are we still battling with ugly conservative Senators over important immigration reform? Why is the First Gentleman, as he would presumably be called, a stereotypical drunk? Why is the Chief of Staff, conveniently also a woman for no discernible reason other than what might be implied as a lesbian relationship with the President—because who would EVER assume that a female President would be heterosexual, right?—pointing out the negative effects of having to be married to a man?

All in all, the book was fairly campy and clichéd while also reaching way too far to come across as cool to its intended audience. Unfortunately, the book also fell very short in terms of readability, as it referenced the first book in very obscure ways that left the reader wondering what had happened in book one. It’s very sad that what could have been an interesting insight into the lives of some of the most power-associated teenagers in the world depicted them as airheads with the morals of gutter rats.

The Capital Girls series is available now from Amazon, Barnes and Noble, Kobo, and more.