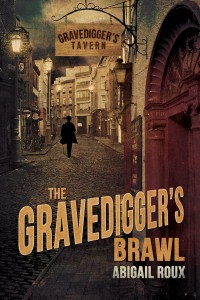 It’s not a secret that digital publishing and ebooks have opened up a world of literature to astute readers who otherwise would have had no opportunity to browse and purchase key titles in their libraries. Most notably, perhaps, has been the world of erotica literature that has been made available to a broader consumer audience thanks to the anonymity and the availability of digital titles.

The Gravedigger’s Brawl is not only a very masterful work of erotica—especially in the realm of LGBT literature—but it is an incredibly artful piece of ghost literature. Apart from the romantic element and the resulting depictions of physical relationships often found in erotica, this book weaves incredibly layered characterizations and a truly eerie investigation into the spirit world within the story. Where so many attempts at erotica fall short, namely in the random and inexplicable gratuitous sex scenes, Roux’s books is full of  complex story lines that really have a lot to offer a broad audience.

Dr. Wyatt Case is simply trying to keep his job as curator of the museum following a downturn in attendance and a board of directors out for his head. When he is set up on a blind date by a well-intentioned friend, Ash Lucroix turns out to be far more intriguing than Case bargained for. Added to the instant attraction, Ash very well may save Wyett’s job with his suggestion of a local ghost story-themed exhibit, but it will require a level of research and fear that Wyett may not be prepared for.

One of the most important contributions of this book, besides giving readers a very believable inside look at the different sides of love, is its ability to introduce readers to some of the very different levels of classic Gothic  lifestyle, in this case, gaslight. The writing is superb, bringing readers just to the edge of belief in the haunted tales in the story.

The Gravedigger’s Brawl is available now from Amazon, Barnes and Noble, Kobo, and the Riptide Publishing website.