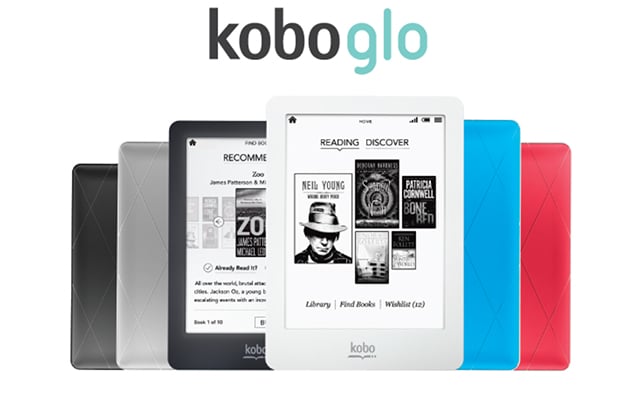 Canadian based Kobo has announced three new e-readers and tablets that will severely boost its product portfolio. At no time has the company ever released more than one device at the same time and now we have two new e-readers and a tablet. We are live in Toronto for the unveiling event and will be posting comprehensive reviews, videos, and interviewing some of the executive team within the next 10 hours. Meanwhile here is our breaking news on the three new devices they have told us about.

Kobo has stepped up to the plate offering its own version of an e-reader that has a glow feature for reading in the dark. It features a six inch e-ink XGA screen with a very solid resolution of 1024×768. This, in effect, gives you a full HD type of display that puts it on par with the defunct iRiver Story HD. This will result in comics, manga, and image heavy content looking quite superb.

The Glow feature has built-in ComfortLight technology with micro-thin hard coating for even light diffusion and durability. One of the benefits behind this is that it provides glare-free, fingerprint-resistant reading.

The Kobo Glo is running on an amazing 1 GHZ Freescale, Solo 6, processor that will make menu navigation and page turns a total breeze. Many e-readers feature a 300 to 600 MHZ processor and customers notice a delay in their interactions on the reader. Amazon, Barnes and Noble, and Sony all have processors in their devices that are well below the 1 GHZ threshold.  There is also 2 GB of internal storage and the option to expand it up to 32 GB via the Micro SD card. Battery life is also a great feature with the ability to garner over 55 hours with the glow feature turned on and one month with it turned off.

The Kobo Glo gives you a rich ecosystem of over 3 million free and paid books to download from the storefront. Any purchase you make is stored in the cloud and can be readily accessed on any Android, iOS, Blackberry, or other official apps on a myriad of devices. Reading Life is also at the forefront and this lets you earn rewards and achievements for reading books. There are 7 font options to change the default text, such as Times New Roman and Ariel. You can even change the size of the font and there are 24 different options, which leads the field in the customization of your reading experience.

One of the new software features found in the Kobo Glow is called “Kobo Picks.” It is a new recommendation engine that will give  you similar titles to the ones that you purchased and functions like an iTunes Match type of service. It is going to be available in October and will cost a paltry $129.99. Stay tuned, we will be posting a slew of videos and pictures of this new device.

The North American market is rife with competition from the major e-reading companies. Amazon, Barnes and Noble, Sony, and others all offer devices at the under $100 price point. This makes e-readers fairly accessible to people who are on a fixed budget and allows people to give them as gifts without breaking the bank.

The Kobo Mini is a current generation device that will be offered for only $79.99 and will be marketed internationally. The screen features a five inch e-Ink Visplex V110 display. There is no word yet on the resolution, but it should be around 800 x 600. It has built in Wireless Internet, so you can shop for newspapers, magazines, ebooks, and more via the Kobo bookstore.  Considering the price point, the processor is a solid 800 MHZ, so turning pages and accessing settings should be very quick.

This e-reader is able to tap into all of Kobo’s new social media platforms, such as Reading Life, Kobo Picks, and its cloud storage feature. The Kobo Mini is basically an entry level e-reader with no expandable memory and perfect for people that are new to reading digital books. Mom would love one! This model is also available in October.

The Kobo Vox was the company’s first Android tablet and it saw a ton of success with people wanting to do more than just read. The Android platform has hundreds of thousands of games and apps, and it allows customers to do their own thing. The new Kobo Arc is the next generation tablet that really gives you a ton of value for the hardware it has.

The Kobo Arc features a seven inch HD display with a resolution of 1280×800 pixels and 215 PPI. The screen features the same IPS screen technology: industry-leading display optimized for 178 degree viewing angles and ultra durable glass, resistant to damage, scratches, bumps, and drops . Underneath the hood is a Texas Instruments OMAP 4470  1.5 GHZ dual core processor and 1 GB of RAM. There are two different storage options at 8 GB and 16 GB, depending on your needs.

On the front of the ARC is a front facing 2 MP camera that can be used for Skype or other video conferencing programs.  What I really dig about the ARC is the company taking a page out of the Blackberry Playbook, with the front facing speakers. You have dual built-in front facing speakers with SRS TruMedia sound and a built-in microphone. At Good e-Reader, we review a TON of tablets and e-readers. One of my most sought after features is having the speakers on the front of the unit, so the sound is facing you. Many devices put the speakers on the back, which muffle the sound and make you hold it in such a way that the speakers are raised. Battery life should be around 10 hours of continuous use and will last up to two weeks on standby mode.

On the software front, the ARC is running Google Android 4.0 with a Jellybean update in the pipeline for the future. Use WiFi Direct to stream multimedia content to your TV with a compatible A/V adapter. Enjoy all of the Android customization features, such as re-sizable widgets and face unlock.

Earlier in the year, Kobo finally attained Google certification and the older Vox model was finally allowed to tap into Google Play. The ARC continues the trends of giving customers the ability to tap into a rich and expansive ecosystem to deliver apps, games, and content. Speaking of content, the Kobo bookstore is front and center, giving you the ability to download over 3 million free and paid titles. It also makes reading social with Reading Life. Track your Reading Stats and share your current read, favorite passages, and Reading Life awards to Twitter and Facebook with full Timeline integration, and Kobo Pulse. It also has a built-in Merriam-Webster’s Collegiate dictionary and connects to Wikipedia for more in-depth analysis and research.

The ARC is intended on being a truly international device with menu, settings, and language support for English, French, German, Spanish, Portuguese, Japanese, Dutch, and Italian. There are the core markets that Kobo has expanded into over the last year and the inclusion of Portuguese gives you a sense that the company will soon expand into Brazil.  The 8 GB version of the Arc is poised to cost around $200, while the 16 GB edition will be $250