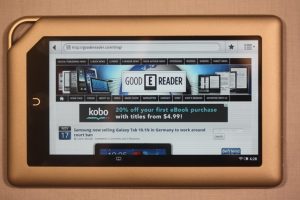 Barnes and Noble, the book retail mainstay, announced its fourth quarter earnings yesterday and showed a steady sales figure. While B&N now records earnings for NOOK as a separate division, it put BN.com and stores sales together in one retail category.

Although the percentage at a 0.4% increase might sound miniscule, that number actually works out to bringing B&N an impressive $1.4billion. The company still manages to post a nearly $11 million loss for the fiscal year after overheard considerations.

“We grew our business in 2012 while continuing to make the necessary investments for the future of the business,” said William Lynch, Chief Executive Officer of Barnes & Noble. “In digital, our NOOK content sales continued to explode with 119% year-on year growth. In the quarter we also announced a historic new partnership with Microsoft that will include a significant investment in Newco, and that will capitalize the company to fuel continued growth in digital and international expansion. Lastly, we announced NOOK Simple Touch with GlowLight, that we started shipping in the first quarter of fiscal 2013, which has quickly become the highest rated eReader in the market. At retail, we had a terrific year growing comparable bookstore sales 4.5% for the quarter and 1.4% for the year, a result of our effective new merchandising efforts and continued industry consolidation. As we look out to fiscal 2013, we feel the company is strategically well positioned to grow value for shareholders.”

The book and ebook retailer was very confident, though, because it has an undisclosed deal in the works with Microsoft, even as B&N works to sell of parts of its NOOK stores and ebook locations. While ebook sales were down slightly from the previous year, content still made up nearly $5 billion for the company, but returns on unsold NOOK devices took a toll on profits.