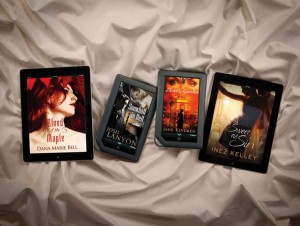 While a number of forward thinking publishing houses have developed ebook-only imprints, especially in high volume genres like romance, HarperCollins has announced its erotica imprint within its Avon romance imprint. The new division, Mischief, will launch with thirteen original ebooks and plans to release four ebooks per month, a slight number given the popularity of e-reading among romance fans.

The erotica genre as a whole came under attack in the last two weeks when PayPal ordered more than 2,000 titles that were deemed inappropriate to be removed from Smashwords’ catalog of ebooks; failure to do so would result in the cancellation of Smashwords’ PayPal account, rendering the ebook distribution site incapable of accepting payment for ebooks in its current method. PayPal relented under pressure from authors, readers, and anti-censorship groups, while still maintaining its right to not allow PayPal users to purchase ebooks that contain illicit images and photos.

The Bookseller released the titles that will be available upon the full launch of Mischief, which are to include Red Grow the Roses by Janine Ashbless;  A Study in Shame by Lucy Salisbury; Sisters in Sin by Primula Bond; and Powerplay by Charlotte Stein. Also on the list are novella, Kinky, by Justine Elyot and anthologies Submission, Sex and the Stranger, Shameful Thrills, The Swap, Exposure, At Your Mercy, In Her Service, and Girl for Hire.