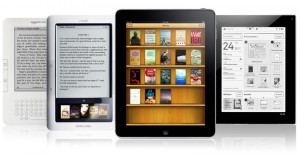 A recent article by Paul Biba at Teleread gave some more definitive numbers on the popularity of e-readers and digital editions. The information came from a survey by Harris Interactive from over 2,000 adult respondents in February this year.

One of the larger surprises from the data was the lack of age polarization in the use of e-readers. Unlike the very typical divide in the adoption of new technology, e-reading has worked its way into the lives of as much as 30% of the population of adults, despite the recent Bowker study that showed that teenagers are less likely to opt for ereading than older adults. The Harris results actually indicate that the rise in e-reader use can be a positive indicator for publishing companies who are taking steps to embrace ebook publication, as this purchase information shows:

“Purchase behavior is similar. Over one-third of those who do not use an eReader (36%) say they do not purchase any books in a typical year while one in five eReader users purchase over 20 (20%) and between 11 and 20 books (21%) in a typical year.”

The full text of Biba’s article on the survey can be found here.