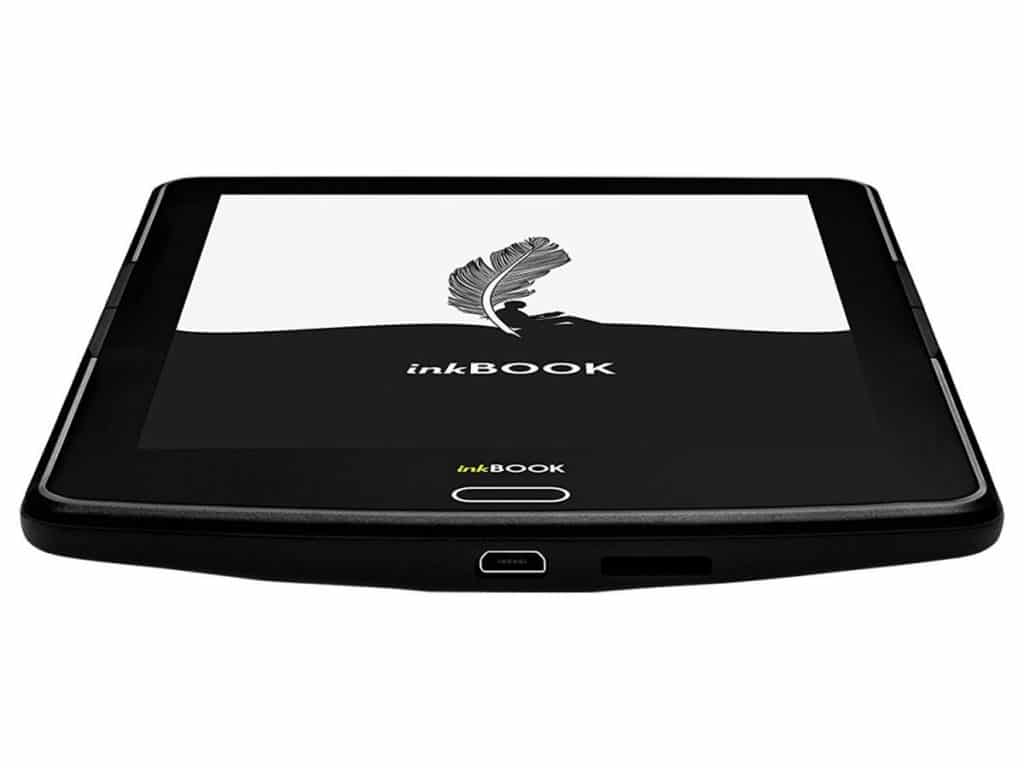 The Inkbook Lumos e-reader might be the worst e-reader made in the past four years. It harkens back to the dark days of pitiful resolution and woeful hardware that make the simple act of reading an agonising experience.

This is the first abysmal device from Arta Tech. The company actually has a good track record of releasing solid e-readers. The Prime is their bestselling device ever and the upcoming InkBook Infinity is striking all the right notes. 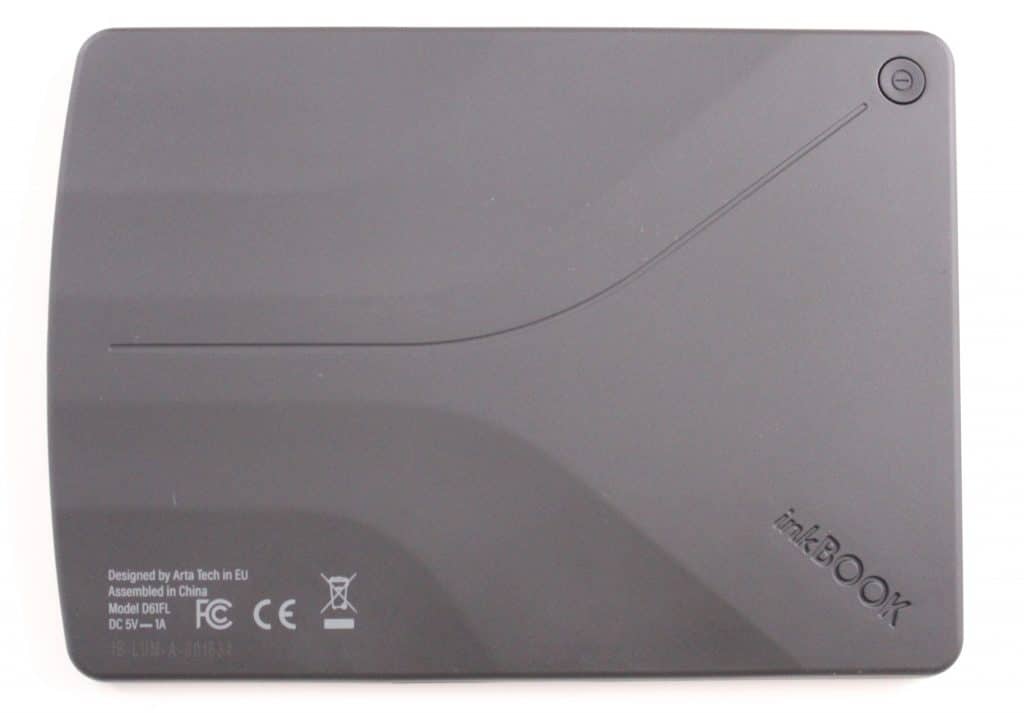 The Inkbook Lomus features a six inch capacitive touchscreen display with a resolution of 800×600 with 167 PPI. This is an entry level e-reader, similar to the Kindle Basic. It has a front-lit display to read in the dark and a new color temperature system.  Instead of white and orange LED lights on the bottom of the bezel, which has been the trend lately, the Lomus employs white and blue.  You can either have the screen warm or cold, or a combination of both.

Underneath the hood is a 1.5 GHZ Dual-Core Cortex A9 processor,  instead of a Freescale, so performance is definitely an issue. There is WIFi, 128MB of RAM, 4GB of internal storage and an SD capable of supporting an additional 32GB.  It is powered by a 2000 mAh battery, weighs 165 grams and the dimensions are 159×114×9 mm.

The Inkbook Lumos has a uninspiring design. It has a sunken screen, instead of one flush with the bezel. It has a home button on the bottom, that doubles as a status indicator light and two manual page turn keys on the left and right side. The big problem with the page turn system is that they only have a single key, you press up for back and the bottom for forward. I constantly found myself misclicking because the page turn system has no separation between forward and back buttons.

On the back of the e-reader is hard plastic and the power button is on the top left corner. The corners on the device are rounded, instead of square. On the bottom of the device is  the SD card and Mini USB to power the device or to connect it up to your computer to sideload books. Overall, this is a very thick e-reader with a giant bezel. 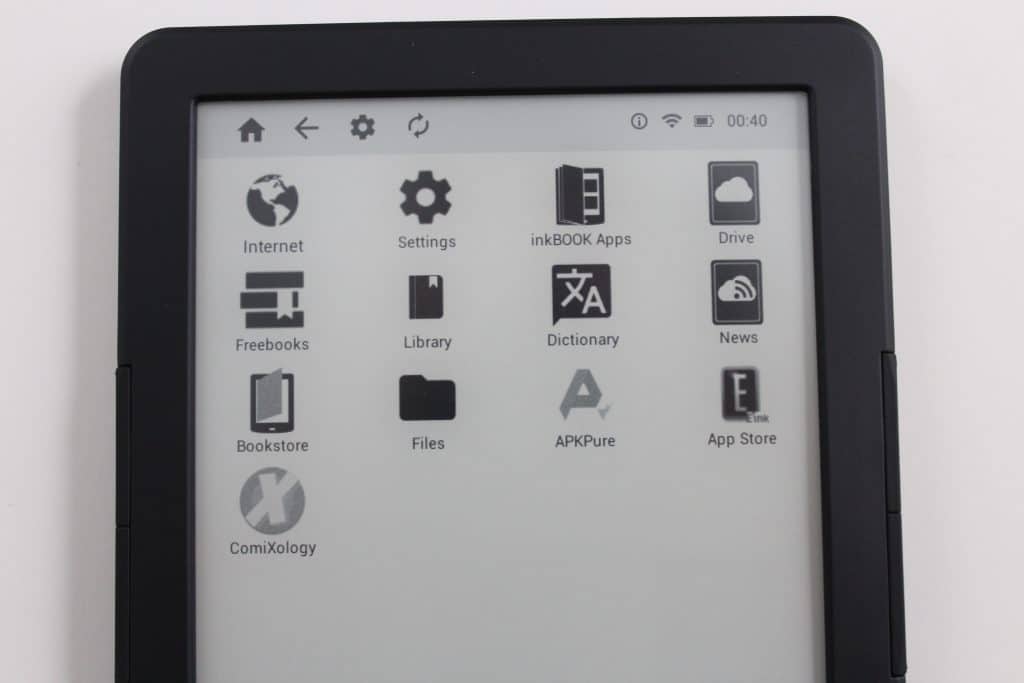 The Lumos has three redeeming qualities, but with a double edged sword.  It is powered by Google Android and has an app store so you can download apps, or even sideload them. Sadly the version of Android is 4.2.2, so it is fairly outdated and many of the most popular ebook apps do not even support it anymore.  Inkbook has their own app store, but they only have 16 apps and most of them only appeal to people who live in Europe.

Sideloading apps is a bit of a complicated issue. Normally with Android if you download an app via the internet browser and click on the notification tab you can click on the file to install it. When you attempt to do this with the Lumos is throws some generic error message at you, saying this action is not supported. In order to sideload an Android app you can only use the default file manager to browse the devices internal memory or the SD card and then click on the APK file and it will install properly. 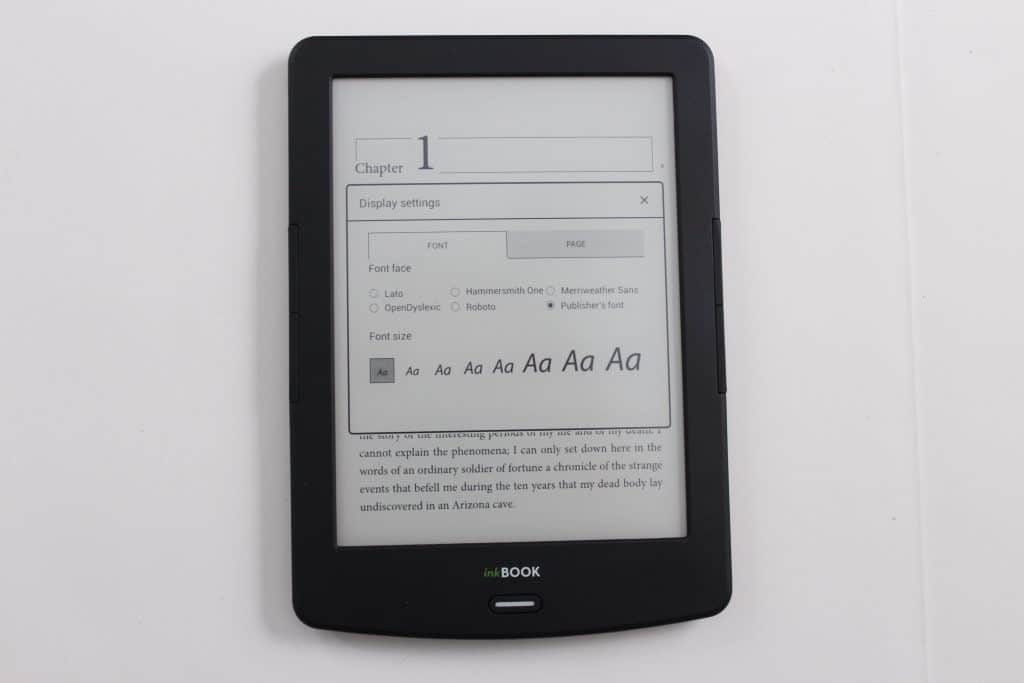 The best aspect of the Lumus is the stock e-reading app. It performs really well if you are taping on the screen to turn the pages of a book. It does not support using the swiping motion to turn a page and the physical page turn keys are hit or miss, but if you tap, you are good! It supports a myriad of formats such as EPUB, MOBI, TXT, FB2, HTML, RTF, CHM and PDF.

There are plenty of ways to augment the reading experience.  There are 7 different font sizes and six font types. This includes Lato, OpenDyslexic, Hammersmith One, Roboto, Merriweather Sans and the publishers default. Advanced options include contrast, screen orientation, margins and line spacing.

The Lumos  has Adobe DRM support, which means you can use Digital Editions to load in EPUB and PDF files you purchased from other online stores or have borrowed from Overdrive. There are no tutorials on the Inkbook site or in the box that tells you how to do this, so users must figure it out for themselves.

In terms of the UI, you have your library, apps, Free Books, Midiapolis Drive and an internet browser. When you click on the library you can long press on a specific book and delete it. I could not find an option to switch between gridded or list view or even to establish collections. 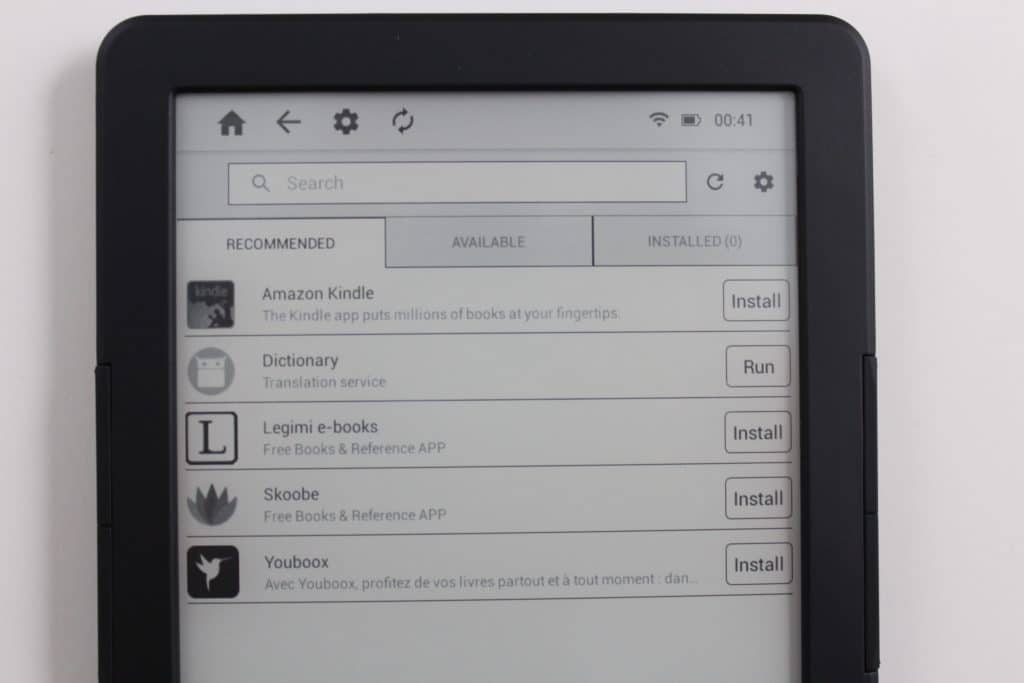 There are not many compelling reasons to buy the Inkbook Lumos. The bookstore is basically glorified RSS feed and when you try and download a book it just endlessly downloads, one book I have been trying to download for five days and it still has not completed.  It is slow, sluggish and relies too much on users knowledge to sideload in their own digital content. I would avoid this e-reader at all costs, even if it costs 99 euros.

I would recommend the Kobo Clara HD, Pocketbook Lux 4, Kindle Basic or the Inkbook Prime over this model. You are getting more features for spending an extra ten or twenty dollars that will make your life wonderful.