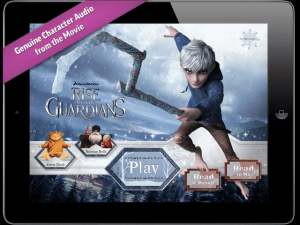 One of the most highly anticipated holiday movies this year is Dreamworks’ Rise of the Guardians, due out November 21st. It follows the story of what are seemingly adorable mythological celebrities who are, in fact, responsible for saving the world from the evil Pitch. Rather than just another telling of the “heroes save the world and spread Christmas cheer at the same time,” imagine instead a harrowing adventure involving a gruff and burly Santa Claus and a fully armed Easter Bunny.

Children’s digital publisher iStoryTime, creators of children’s titles like the Madagascar line of ebooks, has developed the interactive adaptation of the book, complete with read aloud feature, full-color imagery from the movie, and a host of bonus features which include games and a Sandman alarm clock.

When digital titles first appeared for children, many consumers were reluctant to take the bait when it came to handing their children an expensive device for e-reading. Others argued that content for children was too close in nature to video games, calling into question how much genuine learning and reading improvement could be made in that format. But the popularity of titles such as those from iStoryTime and other creators of quality children’s content have shown that younger readers can be engaged in a well-made story while still developing their skills.

iStoryTime’s Rise of the Guardians ebook is available for 99-cents for a limited time in the iTunes store.