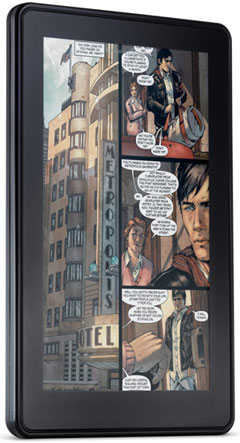 A sleek new design and a cheaper price point aren’t the only thing that Amazon fans are anticipating for November. Besides the obvious features of the Kindle Fire tablet PC and the Amazon name to back it up, comics and graphic novel fans are going to love the included content.

The Kindle Fire tablet will come with 100 DC Comics’ titles, including a never-before-released digital edition of the 400+ page Watchmen graphic novel; the print edition of that masterwork has sold over one million copies, and the pre-order of the digital title is currently running at $9.99, but Kindle Fire consumers will receive a pre-installed copy as part of their purchase.

GoodEReader.com has reported in the past on the difficulties that fans of graphic novels face in trying to enjoy electronic reading. Screen resolution is an issue, as is the need to constantly zoom in to view images and read the text. Indie artists who work in the graphic novel genre face the dilemma of finding a feasible self-publishing platform for their digital works.

Hopefully, Kindle Fire’s success with the 100 title release, much like the success that DC Comics has already encountered with the digital day-and-date feature of The New 52 release last month, will mean a greater availability of titles for comic fans and broader access to digital self-publishing for more and more graphic novelists.