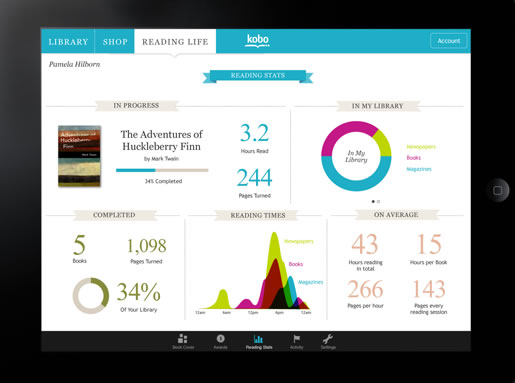 Kobo, the e-reader company that brought over 2.3 million e-books to over 200 countries, innovated the social networking concept of reading with Reading Life, a stage for connecting with other readers through Facebook-sharable awards and Twitter integration, and enjoying an interactive experience with e-books such as its character check-ins.

The Reading Life app was made available for iPad and iPhone, as well as the Android-powered smart phones, and was well received among Kobo’s customers, but with the recent emergence of the newest version—Reading Life 4.4—the user ratings have spoken for themselves.

The new app has moved into the top position in the Apple App Store and has resulted in a 20% increase in downloads from version 4.3. Within the first week of its appearance, more than 25,000 new bookshelves were created and Kobo users are spending as much as 10% more time in the app than with previous versions.  Internationally, the 4.4 version is enjoying the highest user ratings of any e-reading app in the U.S., Canada, and the U.K.

So what makes the new version of Reading Life earn such accolades?  The best feature across the board seems to be the ability to have more customization controls from user to user, but the newer app’s ease of navigation and ability to organize the readers’ virtual bookshelves were mentioned frequently in the comments section of review sites.

“Kobo has been focused on creating the best experience in eReading since day one. We’re readers at heart and we build apps for other readers to enjoy. This passionate community has spoken:  they love our app the best,” said Michael Serbinis, CEO of Kobo.