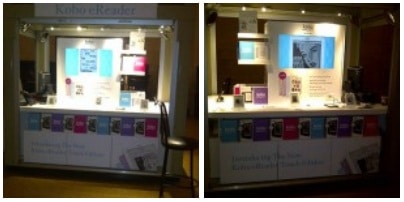 Kobo has taken to the streets in an attempt to regale the common man with the virtues of carrying a library in your pocket. They have opened up their first kiosk location in Grand Central Terminal at the Graybar Passage to show off various e-readers and accessories.

You can eagerly explore the Kobo Touch and various other devices under the Kobo brand. There are around 4 specialists onsite to answer any of your questions and then process your payment. Starting Monday, and for a limited time, purchase your new eReader at the Grand Central Terminal store and they’ll give you $10 towards any eBooks of your choice.