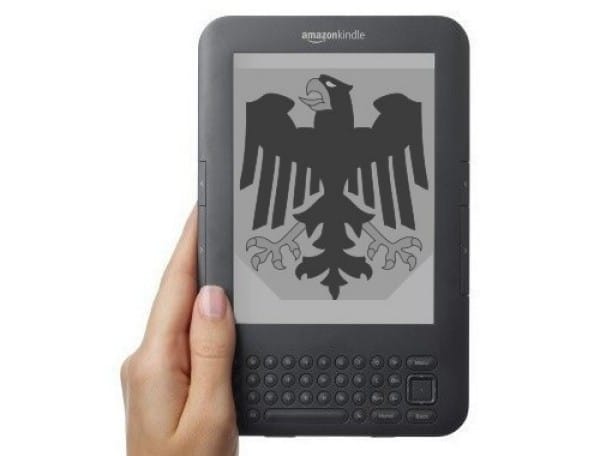 Despite the launch of the Amazon.de German Kindle store in April of this year and the designation of Germany by many industry leaders as the next front line of digital publishing, e-book sales have not taken off as they were originally expected. Unlike its U.S. online counterpart, which now sells more e-books than print, the German Kindle store sells only one e-book for every 100 print books, making up only .5 percent of total book sales last year. While the digital download market in German is fairly strong in terms of music, software, and videos, e-books still make up only 5 percent of downloads, according to the market research company GfK.

While the culture’s more traditional attitude towards printed books has taken the blame for lagging e-book sales in the country, there’s more to it than a relic appreciation for printed texts. The Amazon.de Kindle store only has around 25,000 German-language titles and a competing e-book retailer, Buecher.de, carries around 100,000 digital titles, compared to over 650,000 available in the U.S. Also, Germany still maintains a 120-year-old law regarding the pricing of books, which mandates that any book sold within the country must be sold at the same price from any vendor or retailer. Finally, despite a reduced tax percentage for books, e-books are categorized as software downloads; a print version of a book would be sold at a VAT rate of 7 percent but an e-book download of the same book would be taxed at 19 percent.

The price point of e-books in Germany has also led consumers to take a cautious approach towards digital reading. While American readers are used to enjoying a reduced price for e-books due to lack of printing and shipping costs, as well as nearly instant access to titles on or close to the print release date, that is simply not always the case abroad. While there is often less than a 20 percent difference in price between an e-book and its print version, many titles share an identical cost across both platforms. Instant access to e-books has also been an issue for German consumers, as many digital retailers still do not offer a full complement of titles in their catalogs.

Libreka has been working since 2007 to bring greater access to titles to German book retailers. As the leading platform for German e-books, Libreka affords booksellers the opportunity to sell e-books without risk of investment through its partnership with the German Publishers and Booksellers Association. As a neutral party, Libreka seeks to expand the number of titles available to German consumers and therefore broaden the use of e-reader technology throughout the country.