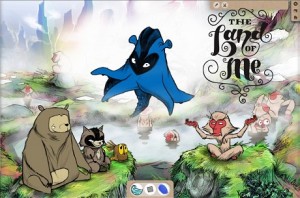 A number of digital publishers took advantage of the sudden growth of tablet use for reading by producing dynamic interactive ebooks, especially those aimed at very young and emerging readers. In order to stand out in a quickly crowding marketplace, publishers have built on the existing technology to create even more features for digital reading. Personalization such as Sourcebooks’ Put Me in the Story platform and celebrity voice-over narration all add to the reading experience for children.

Now, UK-based Me Books has brought the interactivity and personalization to another level with the ability to allow the readers to record themselves reading or incorporating sound effects in order to make a personal version of the title. With several titles already available, Me Books is placing greater emphasis than ever before on establishing a true reader connection with the story. Co-founder James Huggins spoke to GoodeReader about the process and the importance of the platform.

“About three and a half years ago, we were all involved in visual effects and post production. It was really one of those moments that’s not particularly well-planned or anything, where you think to yourself, ‘I’d really like to do something different,’ I’d like to stay in an industry where technology is being used creatively in terms of the consumer and the creator and is involved in story telling in some way. The arrival of our kids kind of focused the attention on these plans.”

“The first thing we did was to make The Land of Me, which was essentially an experiment and a typical project that pushed the bounds of what a book is technically, creatively, and commercially. We were trying to raise the bar for interactive books. In many ways, I think we leapt a few steps forward in terms of what’s really around and what the market was ready for.”

When Me Books first began to come together, the iPad wasn’t yet released, so the Land of Me was first designed as a desktop app. It involved allowing children to rearrange words in the book to change the experience, manipulating what happened in the story. This was meant to illustrate for the children that the words were powerful to the story. With the development and launch of the iPad, Me Books rethought its options for tablet use.

“The tablet really is perfect for young children in terms of the touch screen, which lets them experience this really valuable, really engaging content. The fine motor skills of young children who can’t use a mouse or keyboard means the tablet is a much more comfortable home for Land of Me.”

One aspect of these interactive book platforms that has gained ground recently is the educational potential, primarily for struggling readers. “We worked with educators,” continued Huggins, “because Land of Me felt as appropriate  at home in someone’s house as in a primary school. We took a lot of cues from picture books because there aren’t a lot of things that sit comfortably in a classroom and in a home.”

With licensing concerns quickly being addressed on the various titles, Me Books plans for a US launch sometime in the spring of 2013.