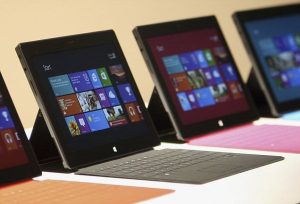 New Surface tablet computers with keyboards are displayed at its unveiling by Microsoft in Los Angeles, California, June 18, 2012. Microsoft Corp introduced its own line of tablet computers on Monday at a much-hyped press event in Los Angeles, marking a major strategic shift for the software giant as it struggles to compete with Apple Inc and re-invent its aging Windows franchise. REUTERS/David McNew (UNITED STATES – Tags: BUSINESS SCIENCE TECHNOLOGY)