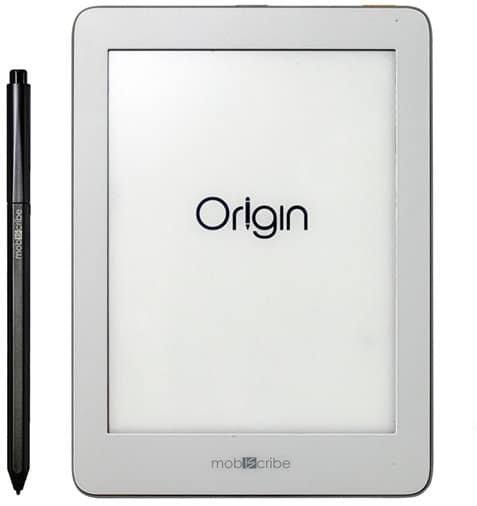 Mobiscribe has a second generation e-reader and e-note that is going to be shipping at the end of January. This is going to be called the Origin and will be similar to the original, except it would have a faster processor, more RAM and extra internal storage. The Android OS has also been upgraded to 8.1, the original was running Kit-Kat. This model has a grey color scheme, instead of black.

The Origin will feature a six inch capacitive touchscreen display with a resolution of 1440 x 1080 and 265 PPI. It will have a series of white and amber LED lights alongside the bottom of the bezel, that will project light evenly across the screen and not into your eyes. This provides a better illumination experience than a traditional smartphone or tablet. There is also a WACOM layer, so you will be able to draw, make notes, edit PDF files or annotate ebooks.

There are a few new software features that the Origin will have. Built-in writing to text feature, built-in save-to-cloud feature and a digital whiteboard for real-time collaboration. There is also going to be a new app store, that Mobiscribe developed. It will have popular apps like the Kindle, but of course you can also sideload in your own APK files.

Nobody has really talked much about this new device yet. Just a few Reddit posts, Mobiscribe has been really quiet about this model. They launched a crowdfunding campaign, but was removed from Indiegogo a couple of weeks into their fundraising. They are taking orders on their website and the next batch should be shipping at the end of January. I asked the company to send us a review unit, hopefully they will.