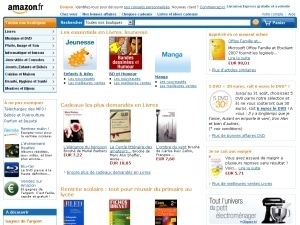 With the launch of the Amazon.fr Kindle store to offer Amazon ebooks to French customers, the Kindle Direct Publishing platform also opened in France. While not all international Amazon sites maintain an electronic publishing capability, more and more indie author opportunities are opening up worldwide, especially throughout Europe.

This location marks the fourth platform for authors to take advantage of when publishing their own ebooks, as Amazon already supports Kindle Direct Publishing in the U.S., UK, and Germany. Now, authors will have another market at their disposal that still utilizes not only the 70/30 royalty share, but also still enables readers to find content via Kindle, Amazon Cloud, and the free Kindle apps for a variety of devices.

“Authors and publishers can now reach more readers by using Kindle Direct Publishing to make their books available to French customers in the new Amazon.fr Kindle Store, as well as customers all over the world,” said Greg Greeley, vice president, European Retail in a press release issued today. “Authors in many countries have already seen tremendous success with KDP, like American author John Locke who has sold more than 1 million Kindle books using KDP, and we’re happy to bring the program to French authors and publishers.”

While the UK store may have been the broadest international market for indie authors wishing to self-publish, the Amazon.de German KDP site opened up Amazon’s first foreign-language specific self-publishing opportunity. Amazon.fr is intended to reach customers in France, Belgium, Monaco, Switzerland, and Luxembourg in order to provide them with Amazon content.

One often overlooked concept in indie publishing is the popularity of foreign-language content, both to English-speakers and non-English speakers alike. Authors in any of the countries supported by a Kindle Direct Publishing platform can take advantage of the smaller catalog of content for foreign language titles. While a resident in France may be pining for German-language ebooks, a U.S. resident may be searching for indie French-language ebooks. As location is not limiting to the writer, indie authors can sell their digital content via any and all of the Amazon Kindle Stores.

Authors and publishers can utilize the new KDP website to make their books available in France, Germany, the UK, US and more than 100 countries worldwide, while continuing to own the rights to their books. The popular KDP 70% royalty option is also now available for books sold in France, and people can receive their payment in Euros, British pounds or US dollars. For more information and program terms, please visit http://kdp.amazon.fr.

“Authors and publishers can now reach more readers by using Kindle Direct Publishing to make their books available to French customers in the new Amazon.fr Kindle Store, as well as customers all over the world,” said Greg Greeley, vice president, European Retail. “Authors in many countries have already seen tremendous success with KDP, like American author John Locke who has sold more than 1 million Kindle books using KDP, and we’re happy to bring the program to French authors and publishers.”

The Amazon.fr Kindle Store, which also launched today, serves customers in France, Belgium, Monaco, Luxembourg and Switzerland. The French Kindle Store offers customers a vast selection of over 35,000 French-language Kindle books, all 28 L’Express best sellers available in digital—the most in France—hundreds of popular graphic novels and over 4,000 free classics in French.

Amazon.com, Inc. (NASDAQ: AMZN), a Fortune 500 company based in Seattle, opened on the World Wide Web in July 1995 and today offers Earth’s Biggest Selection. Amazon.com, Inc. seeks to be Earth’s most customer-centric company, where customers can find and discover anything they might want to buy online, and endeavors to offer its customers the lowest possible prices. Amazon.com and other sellers offer millions of unique new, refurbished and used items in categories such as Books; Movies, Music & Games; Digital Downloads; Electronics & Computers; Home & Garden; Toys, Kids & Baby; Grocery; Apparel, Shoes & Jewelry; Health & Beauty; Sports & Outdoors; and Tools, Auto & Industrial. Amazon Web Services provides Amazon’s developer customers with access to in-the-cloud infrastructure services based on Amazon’s own back-end technology platform, which developers can use to enable virtually any type of business. The new latest generation Kindle is the lightest, most compact Kindle ever and features the same 6-inch, most advanced electronic ink display that reads like real paper even in bright sunlight. Kindle Touch is a new addition to the Kindle family with an easy-to-use touch screen that makes it easier than ever to turn pages, search, shop, and take notes – still with all the benefits of the most advanced electronic ink display. Kindle Touch 3G is the top of the line e-reader and offers the same new design and features of Kindle Touch, with the unparalleled added convenience of free 3G. Kindle Fire is the Kindle for movies, TV shows, music, books, magazines, apps, games and web browsing with all the content, free storage in the Amazon Cloud, Whispersync, Amazon Silk (Amazon’s new revolutionary cloud-accelerated web browser), vibrant color touch screen, and powerful dual-core processor.

This announcement contains forward-looking statements within the meaning of Section 27A of the Securities Act of 1933 and Section 21E of the Securities Exchange Act of 1934. Actual results may differ significantly from management’s expectations. These forward-looking statements involve risks and uncertainties that include, among others, risks related to competition, management of growth, new products, services and technologies, potential fluctuations in operating results, international expansion, outcomes of legal proceedings and claims, fulfillment center optimization, seasonality, commercial agreements, acquisitions and strategic transactions, foreign exchange rates, system interruption, inventory, government regulation and taxation, payments and fraud. More information about factors that potentially could affect Amazon.com’s financial results is included in Amazon.com’s filings with the Securities and Exchange Commission, including its most recent Annual Report on Form 10-K and subsequent filings.