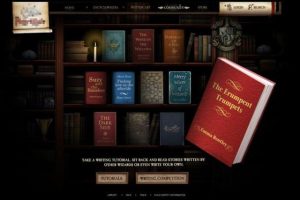 JK Rowling’s interactive Harry Potter site Pottermore released new chapters in the second installment in the boy wizard’s series yesterday, including the final chapters of the title Harry Potter and the Chamber of Secrets. New features on the world building site include an insider view into the Slytherin house, a gaming experience allowing users to fight creatures in the Forbidden Forest, and a closer look at various characters introduced in that book.

Each release on Pottermore also includes more information from the author that was not a part of the published books, giving fans a more in-depth awareness of the story line, the setting, the characters, and more. Often these additional features are developed from the author’s original notebook she kept while writing the series.

Rowling established the Pottermore site as both a breeding ground for fan-based discussions on the series and an interactive creation for readers who continue to love the wizarding world, despite the finale of the series. It also serves as the exclusive retailer of the Harry Potter ebooks, as Rowling originally retained all future digital rights to the books when they were first published in print. The author originally maintained that the Harry Potter series is complete and there will be no future titles to come from it, but has recently suggested that another Harry Potter book might be something she would consider in the future.