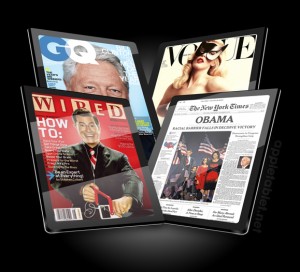 GoodeReader reported yesterday on the iOS launch of Next Issue’s subscription reading service from a number of mainstream publishers. CEO Morgan Guenther spoke to GoodeReader about the original Android launch of the service in April as well as yesterday’s Apple launch for all iPad models.

“We’re once again focused on the top-tier premium titles,” said Guenther, “and they’re all optimized for the tablet itself. We’ll have the thirty-two that we launched with on Android, but we’re adding some of the Conde Nast titles that we didn’t get the first time. We’re focused in this case on going where the readers are.”

Next Issue took much the same approach as they did in April, which was quite innovative for the industry. “Instead of living in a world where every magazine is a separate application and you download apps for every magazine, we created a single app for all magazines with a single unifying navigation. It’s a much easier way to move from magazine to magazine. We’ve got the same cloud-based storage to handle the 350 issues that are available at launch since the catalog goes back to January 1st.”

“We targeted on the Android tablets a very small subset of those tablets, we think there were only about two or three million tablets total in the US that could access our application, and that was for a reason. We really wanted to get it out on a couple of key devices, and then go from there. We’ve learned a lot from the process. The difference with Apple is we’ve got ubiquity across all the models. It’s simple because there’s one hardware and one software platform. We’re not dealing with different device sizes, it’s a very mature platform. Our estimated market this year will be 60 million devices by the end of the year.”

Users will access the free app from the app store, then sign up for one of the two plan options to use the app itself for magazine reading. Next Issue designed a unique consumer proposition and the roadmap for the year is to double the size of the title catalog by August with 65 to 70 magazine. The first dedicated marketing campaign for the subscriptions will take place sometime around Labor Day and follow through with the end-of-the-year gift giving season as consumers are expected to make tablet purchases for the holidays.

In the coming year, plans are underway to incorporate an outside publisher and a social reading aspect, as well as tap international markets.

One of the issues that has affected digital magazine subscriptions is not being provided enough user data to make advertising decisions.