You are here: Home / Digital Publishing News / Nook and eBooks Are the Salvation of Barnes & Noble 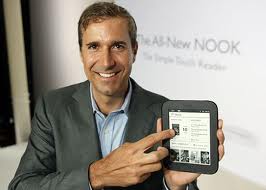 Barnes and Noble, the nation’s largest bookstore chain, has finally succumbed to the reality that Amazon.com has admitted in the last year, that online sales and e-books sales are outselling print, with digital sales reaching over $250 million in the fourth quarter alone. One million new Nook user accounts were created in that same time. Barnes and Noble College, its campus bookstore retailer, recorded almost two billion dollars in sales for the year. And while total sales were down slightly, that number is still well over $4.3 billion.

All of these numbers seem highly complimentary, especially in light of the news that Liberty Media is still in negotiations to purchase Barnes and Noble as an investment strategy. But with strong online figures and a potential investor in the wings, why have there been such bleak predictions from the business sector?

Admittedly, B&N’s sales took a drop, a bigger drop than they’ve experienced in recent years and a larger fall than last year by almost $200 million. But those numbers are easily explained by company CEO William Lynch as partly driven by the massive investment in their technology platforms, such as the company’s newest e-reader device unveiling last month. This fiscal year is also the first time that Barnes and Noble College has been able to report a full year’s worth of income, so the numbers might be slightly skewed in favor of growth.

However, B&N’s own website today has released a financial report that shows record growth for this year, with total sales reaching the $7 billion mark. And like the online book giant Amazon before them, internet and digital sales have dwarfed the brick-and-mortar sales that once made Barnes and Noble the largest retail book chain.

All of these numbers point to the fact that the developments in the retailer’s e-reader technology may have hurt them in the short-term, but that over the long haul it may prove to be their salvation. Critics have long cited Border’s lack of a specifically branded e-reader device as part of the chain’s undoing, given that Border’s customers had to look elsewhere for their digital needs. Barnes & Noble’s Nook devices and store-specific features for the device may keep them in the running.