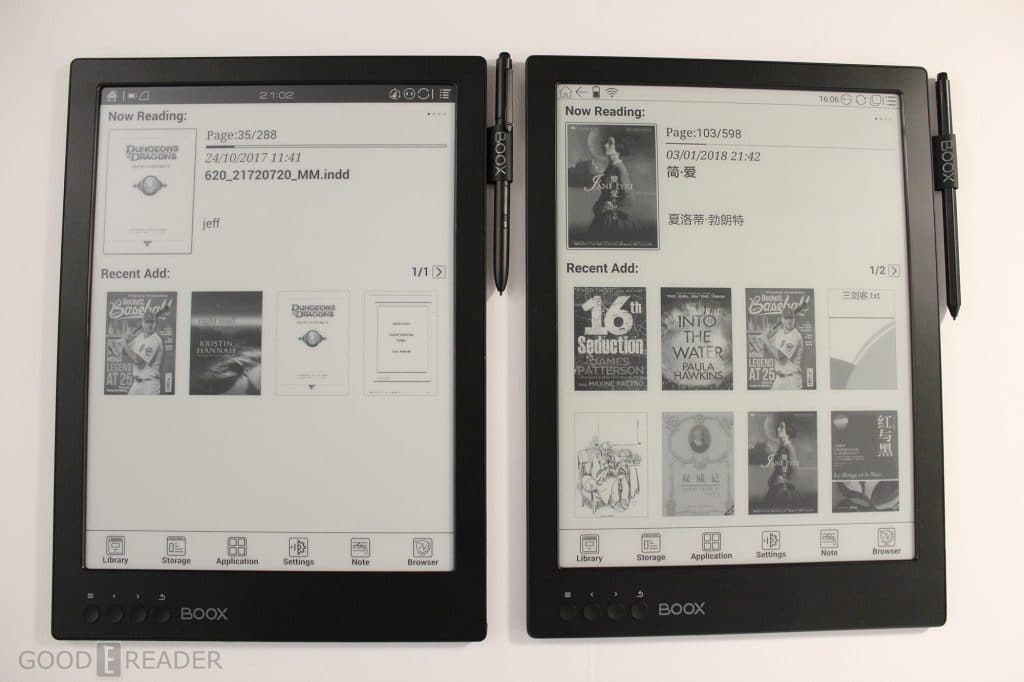 Onyx is currently marketing two different 13.3 inch e-readers, the MAX Carta which came out in 2016 and the new MAX2 which is available now. These two devices are primarily used for digital note taking, editing PDF files and doing some e-reading.

The Max Carta features a 13.3 inch E-Ink Carta display with a 2220×1650 and 207 PPI. The screen is not flush with the bezel like the Sony Digital Paper DPT-RP1, but has a sunken one. It is only compatible with the stylus and does not have a touchscreen. Luckily, it has manual page turn buttons that are compatible with the stock e-reader apps that are pre-installed. Underneath the hood is a Freescale IMX6 1GHZ processor, 16GB of internal storage, SD support for up to an additional 32GB and 1GB of RAM. It has WIFI, Bluetooth, 3.5mm headphone jack and a mono speaker on the back. This device also has an older version of Android and has access to Google Play.

One of the downsides of the Max Carta is that the screen can only be interacted with via the stylus, it does not have a touch layer. The stylus also does not have pressure sensitivity, which means you cannot press firmly on the screen to get thicker lines, it is all software based.

The MAX employs an E-Ink Carta E-Paper display with a resolution of 2200 x 1650 pixels and 207 PPI.  The screen is sunken and does not have a frontlit display, but no large screen digital readers currently have one. This is first large screen 13.3 inch e-reader that Onyx has ever issued that has both a capacitive touchscreen and a WACOM layer. This makes it really easy to navigate around the UI or simply flip the pages of an e-book. You no longer need to exclusively use the stylus in order to interact with the device, which is very compelling.

Underneath the hood is a 1.6 GHZ quad core processor, 2GB of RAM, 32GB of internal storage and does not have an SD Card. It has a giant 4100 mAh battery, microphone, mono speaker and a 3.5mm headphone jack to listen to audiobooks, music or podcasts. This device is running Android 6.0, so it will support almost every app from Google Play, which is preloaded.  It has dual band WIFI for quick internet access and can connect to every public or private network.  The dimensions are 325/237/7.5mm and it weighs just under 550G.