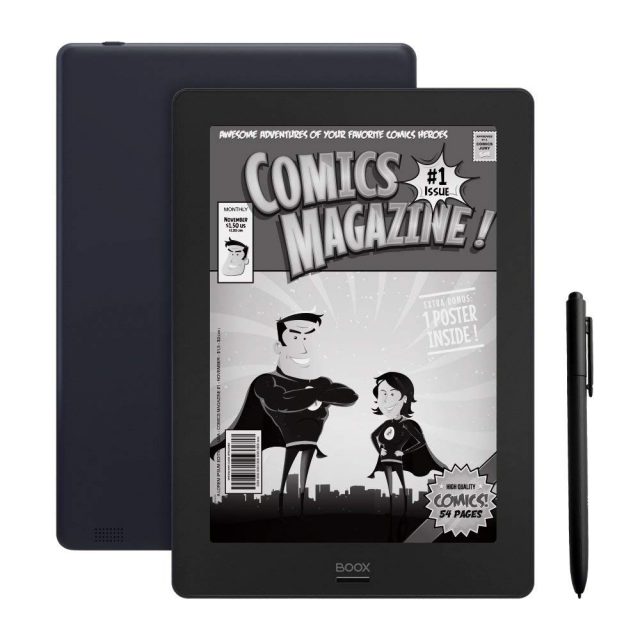 Onyx Boox has confirmed that the Boox Note S will be available on July 26th 2018. This device is a smaller version of the wildly successful 10.3 inch Note that came out late last year. It is retailing for $389 and you can order it from Amazon or the Good e-Reader Store.

The Onyx Boox Note S features a 9.7 inch E Ink Carta flexible display with a resolution of 1200×825 and has 150 PPI.  The screen is completely flush with the bezel, which makes using the touchscreen or using th accompanied more intuitive than the 10.3 Note, which has a sunken screen.  The Note S is employing a lower cost Hanvon Digitizer, instead of WACOM.  This helps drive down the cost of the device, you can purchase it new for $389.

The vast majority of e-reader companies are employing Freescale 1GHZ single core processors and 512MB of RAM. This processor initially came out in 2011 and is really outdated, but everyone is using it anyways. Freescale developed a dual core solution in 2016 and the only e-reader that actually used it was the Amazon Kindle Oasis 2. Onyx has really done a service to the entire e-reader industry by incorporating generic Chinese quad core processors in the past two years. This has really made the MAX2, Note and Note S really stand out.

The Note S is using a 1.6 GHz quad-core processor, 1GB RAM, 16GB storage and has no SD card to enhance storage further or offload apps.  It has two speakers on the back, mic, USB C, 3000mAh battery, WIFI and Google Android 6.0. It has Bluetooth 4.1 and this provides a ton of flexibility. You can listen to audiobooks or music via wireless headphones or a portable speaker. You can hook up an external keyboard or a wireless mouse to get even more productive. Musicians can also hook up a foot pedal or other accessory to automatically turn the pages of sheet music.